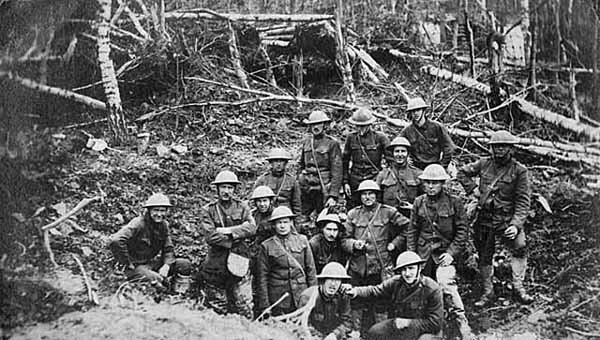 Rollo Lester Mudge Papers. Correspondence, programs, histories, military papers, and similar files (1917-1972) compiled and created by Rollo L. Mudge, Minneapolis, and documenting World War I service of Battery D, 151st Field Artillery. The regiment was part of the U.S. Army 42nd Infantry ("Rainbow Division"). This collection includes correspondence between Mudge and a number of political leaders and World War I veterans of the Rainbow Division (1918-1969); and historical sketches and rosters of the 42nd Division and of its Minnesota veterans. Correspondence also includes official military papers created while the division was in military service. A complete chronology of the activities of the battery (prepared by Mudge) from June 26, 1917, to January 7, 1919; three letters written by servicemen to their families; Field Order No. 5 relating to the 42nd Division's separation from service (1919); and a notebook, which may have been kept by Lt. Carl Sager, relating to all aspects of artillery techniques, including sketches and illustrations. The collection includes seven photographs and snapshots. MNHS call number: See the finding aid in the library (P1643).

After Congress approved President Woodrow Wilson's April 1917 declaration of war against Germany, Secretary of War Newton C. Baker and Major Douglas McArthur devised a plan to combine National Guard units from around the country into one large division. Twenty-six states and Washington D.C. provided units for what became known as the Rainbow Division. Commanded by Colonel George E. Leach, the Minnesota 151st Field Artillery, part of the Rainbow Division, served in France from October 18, 1917, to November 11, 1918. They saw combat in Lorraine, Champagne, Chateau-Thierry, and Meuse-Argonne. On November 11, 1918 (Armistice Day), the 151st was near Sedan.

To Minnesotans, the151st Field Artillery embodied the fight for the "freedom of democracy." The state welcomed them back as heroes in the spring of 1919 with a ceremony on the steps of the state capitol building in St. Paul. Thousands of Minnesotans cheered the men of the 151st, the end of war, and the establishment of peace.