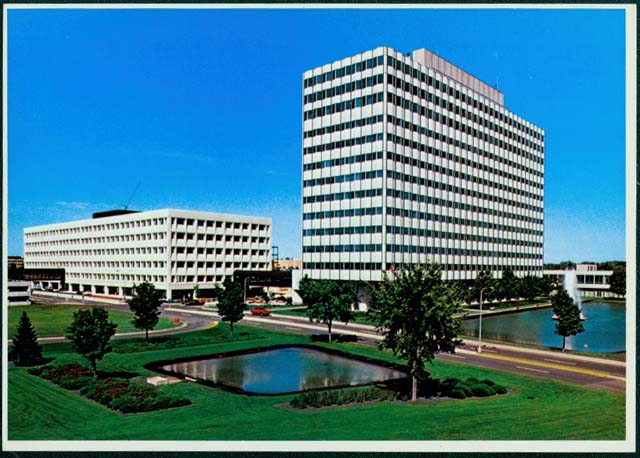 The 3M Company began in 1902 in Two Harbors, Minnesota.  Originally the company, then named Minnesota Mining and Manufacturing, was involved in mining a mineral deposit for grinding wheel abrasives.  Three years later the company moved to Duluth to focus on manufacturing sandpaper products.  In 1910 investor Lucius Pond Ordway moved the company from Duluth to the east side of St. Paul where it developed and manufactured an increasing number and variety of products, including such household necessities as masking tape and "Scotch Cellophane Tape." 3M steadily expanded and diversified, paying its first dividend in 1916.  In 1929 3M Company registered with the Minnesota Secretary of State as a foreign business corporation, marking its evolution into a multinational conglomerate corporation. For many years 3M headquarters were in St. Paul near its extensive manufacturing plants.  Later the headquarters was moved to a corporate campus in nearby Maplewood, Minnesota. It's manufacturing operations are now spread out in many Minnesota locations, including Alexandria, Cottage Grove, Eden Prairie, Fairmont, Hutchinson, and New Ulm, and other locations in the United States and around the world.

3M Company is known for its culture of innovation and investment in research and development which has resulted in the invention of many new products for both the industrial and consumer markets.  Among the products invented, manufactured, and sold by 3M Company are a variety of types of adhesive tape, audio-visual equipment and media, medical and dental products, Post-It Notes, and safety products such as reflective coatings and signs.