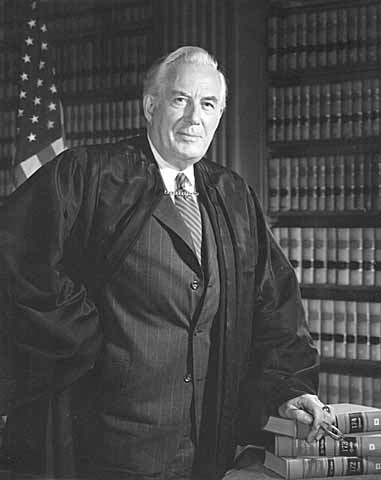 Nomination of Warren E. Burger This is the transcript of the Senate Committee on the Judiciary hearing on the nomination of Burger for chief justice of the U.S. Supreme Court. MNHS call number: KF 8745.B8 U5

Warren Earl Burger was born in St. Paul on September 17, 1907, and in 1931 earned his LL.B. from the St. Paul College of Law (now the William Mitchell College of Law). He went on to serve as an assistant attorney general for President Dwight D. Eisenhower, who in 1956 appointed him to the District of Columbia Circuit of the U.S. Court of Appeals.

Widely-known as a conservative, Burger often tried to dampen some of the Warren Court's more liberal decisions and he articulated the Court's opinion on such important decisions as United States v. Nixon and Milliken v. Bradley.

During his 17 year tenure he drew both sharp criticism and high praise for the opinions he expressed as well as for his guidance of the court. Under his leadership the Court strengthened the separation of powers in government and limited the exclusionary rule, which keeps illegally-obtained evidence from being used in court.

By the time he assumed senior status (retired) in 1986, he had become the longest serving chief justice of the twentieth century. Burger died on June 25, 1995, and is buried at Arlington National Cemetery.