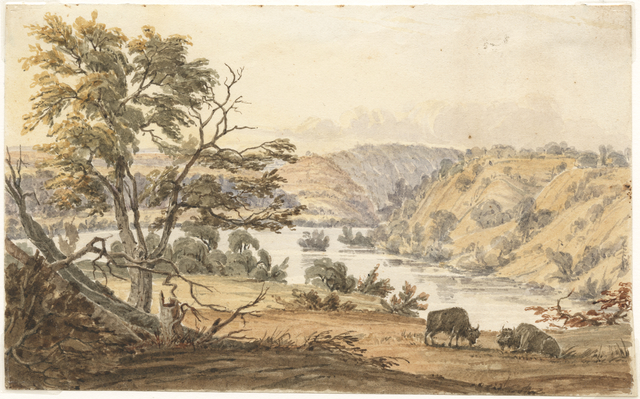 Letter, 1847 November 1.
Photocopy of a letter from Seth Eastman at Fort Snelling to fellow artist Charles Lanman in New York City describing the possible sale of Eastman's Mississippi River sketches, completion of his painting "Indian Burial," and an invitation for Lanman to join Eastman in painting a Mississippi River panorama.
The original letter is in the Library of Congress in Washington, D.C.
MNHS call number: See the finding aid in the library (P939, Eastman, Seth).

Map of the Military Reservation of Fort Snelling, Minnesota, 1857.
In "Fort Snelling (Minn.) Maps, 1815-1965" collection. This particular map is a copy from Record Group 77 (Office of the Chief of Engineers) in the National Archives in Washington, D.C.
MNHS call number: See the finding aid in the library (C22).

Memoir of General Seth Eastman, U.S. Army, by Seth Eastman.
This account of Eastman's life was published after his death in 1875. It focuses on his life in the military, his art, and his relationship with his second wife, Mary. No mention is made of his first wife, Wakaninajinwin or his daughter, Winona.
Washington, D.C.: 1875.
MNHS call number: ND237 .E35 M5

Treatise on Topographical Drawing, by Seth Eastman
Eastman created this textbook to make the technique of map-making and map-reading more understandable. He created symbols that could be used on all maps and explains how to draw height, width, and depth on a two-dimensional sheet of paper. This textbook was made mandatory for all topography classes at the United States Military Academy at West Point.
New York: Wiley and Putnam, 1837.
MNHS call number: Reserve TA 616 .E2

Historical and Statistical Information Respecting the History, Condition, and Prospects of the Indian Tribes of the United States, by Henry R. Schoolcraft; illustrated by Seth Eastman.
The information for this work collected and prepared under the direction of the Bureau of Indian Affairs per act of Congress of March 3, 1847. Eastman worked for five years on his military salary producing 275 pages of illustrations for this text. While Schoolcraft was a "sloppy researcher" and hard to work with, Eastman completed the illustrations in a careful and concise manner, with a strong personal interest in the subject matter.
Philadelphia: Lippincott, Grambo, 1851-57.
MNHS call number: Reserve FOLIO E 77 .S381

The American Annual: Illustrative of the Early History of North America, by Mrs. Mary H. Eastman.
Originally published in 1854 under the title: Chicóra and Other Regions of the Conquerors and the Conquered.
Philadelphia: Lippencott, 1855.
MHS call number: Reserve E 77 .E15a

Chicóra and Other Regions of the Conquerors and the Conquered, by Mary H. Eastman.
A collection of engravings from drawings by Captain Seth Eastman, accompanied by descriptive text, illustrative of the history and customs of various tribes of North American Indians.
Philadelphia: Lippencott, Grambo & Co., 1854.
MNHS call number: Reserve E 77 .E15

The Iris: An Illuminated Souvenir for 1852, edited by John S. Hart.
Most of the material is about the American Indian, and Mrs. Mary Eastman wrote much of it. Re-published in 1853 with the title "Romance of Indian Life."
Philadelphia: Lippencott, Grambo & Co.,1852.
MNHS call number: Reserve E 98 .F6 I6