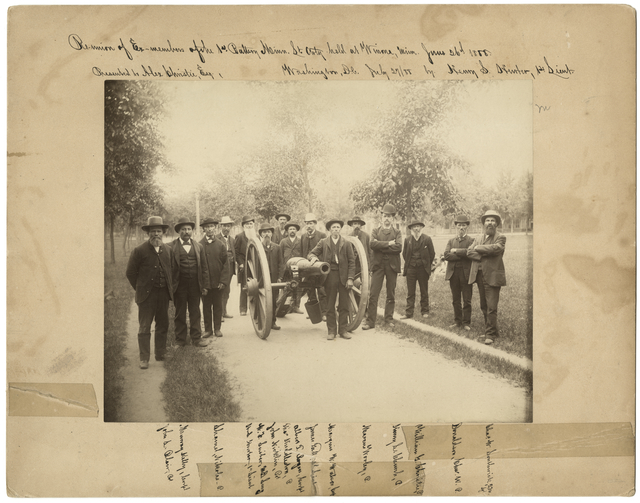 Winston W. Cheatham and Family Papers, 1830-1905.
Largely letters (1864-1865) from James Major Cheatham during his Civil War service with the First Minnesota Battery, describing troop movements, camp life, foraging and destruction in the South, the siege and capture of Atlanta, and William T. Sherman's march through Georgia and the capture of Savannah.
MNHS call number: See finding aid in the library (A/.C514).

William Z. Clayton Papers, 1862-1946.
Includes Captain Clayton's letters to his family documenting his experiences and the role of the battery during the battles of Shiloh, Corinth, the siege of Vicksburg and the Atlanta Campaign. Also included are a copy of the muster-out roll for the battery and a photograph of the battery's battle flag.
MNHS call number: See finding aid in the library (P2199).

Civil War Diary, 1862-1895
Typed transcription of a diary written by Thomas Gordon of Winona, Minnesota, covering the years 1862-1865, while a private with the First Minnesota Light Artillery during the Civil War. Gordon eventually mustered out as a sergeant. Transcribed by Inez Gordon McPherson, 1979.
MNHS call number: See the finding aid in the library (P2881).

James C. Christie and Family Papers, 1823-1949.
The letters of Thomas Christie and William Christie to their father and siblings. Articulate and thoughtful observers of the war, the brothers' letters provide detailed and colorful descriptions of Army life and combat experiences as well as thoughtful reflections on the war and its meaning.
MNHS call number: Digital Finding Aid, also available on microfilm (M539).
Selected letters are also viewable online on the Civil War Letters of the Christie Family.

Reuben Farnum Civil War Letters, 1864-1865.
Letters from Farnum to his wife, Roxanna, describes his service with the Battery including the Atlanta campaign, Sherman's March through Georgia, and the army's march through South Carolina and North Carolina.
MNHS call number: P36

My Dear Companion: The Civil War Letters and Journal of Corporal Albion Otis Gross of the First Minnesota Battery of Light Artillery, January 1, 1864 to June 10, 1865.
A photocopy of a typescript manuscript based on the letters and diary of Private Gross, from the Vicksburg campaign through the end of the war. Gross’ letters give graphic and frank details about life in the army, describing the activities of the battery and its personnel. He comments on conditions such as the food, physical comforts, and military life. Gross also writes about the conduct of the men, such as their drunkenness, looting, and language; the condition of the countryside and its inhabitants; and the competence of the military leaders.
MNHS call number: See finding aid in the library (P2323).

Minnesota. Office of the Adjutant General.

Minnesota. Governor.
This archives series includes Appointments and Correspondence of the Governor relating to Minnesota units. These files may contain information on the appointment of officers, as well as official reports from unit commanders. Letters from Federal officials concerning Minnesota units may be found here as well.