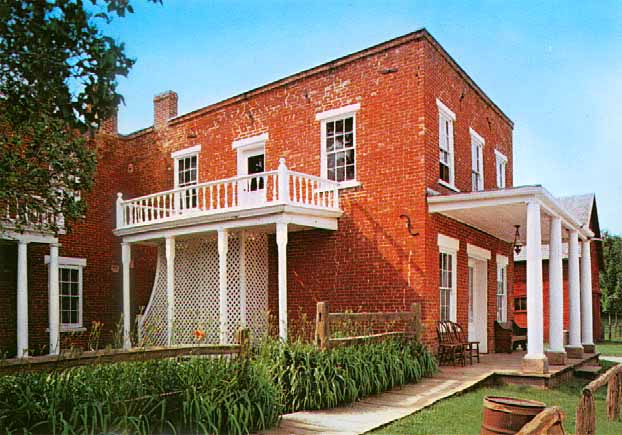 Forestville developed as a pioneer town in the mid-1850s and at its peak boasted a grist mill, school, brickyard, two hotels, two sawmills, a cabinet shop, a blacksmith shop, general store and post office.

In 1852, Major Foster scouted land in southern Minnesota.  He made claims for himself and several family members. Felix Meighen was the first to arrive and built a log building general store. Soon other families moved into the area and brought with them other businesses including a blacksmith shop, a cabinet shop, sawmills, farms, stores, grist mills, and hotels. The Meighen's completed their more permanent brick home and general store in 1857.

However, when the Southern Minnesota Railroad bypassed Forestville in 1868, many townspeople and businesses moved to more prosperous communities. By the 1890s, Thomas Meighen's general store was one of the few remaining businesses in town, and he started to expand his farm and landholdings. Farmers often borrowed from the Meighens or received store goods on credit. When they could not pay their bills, the Meighens granted a note secured on the farmer's land for the amount, plus a high-interest rate. Many defaulted on their loans, and the Meighen's foreclosed on the properties. Through this method and by buying up property sold cheaply by people leaving for more prosperous railroad towns, the Meighens amassed their landholdings, owning the entire town and its surrounding lands by 1889. Thomas Meighen turned Forestville into a "company town" where he employed everyone, paid workers in store credit and rented them houses that he owned.

Thomas Meighen became involved in politics and in 1905 he and his wife, Mary, moved to nearby Preston, Minnesota. The Meighen's closed the door of the general store in 1910 and Forestville as a town ceased to exist.  Due to efforts of local landowners, Forestville became Forestville State Park in 1963.  In 1978, the remaining buildings of Forestville were acquired by the Minnesota Historical Society and in 1992 the Historic Forestville Site opened to the public.

Today visitors to Historic Forestville can look through the eyes of the Meighen family and their workers to learn about a town experiencing economic and population decline.