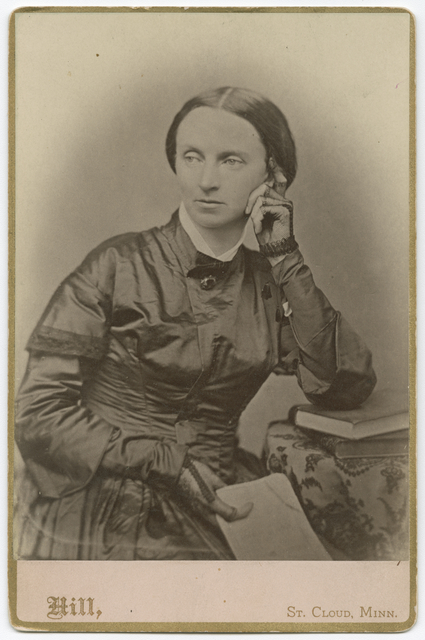 Jane Grey Swisshelm was a newspaper journalist and publisher, abolitionist and women's rights advocate.  Upon arriving in St. Cloud in 1857 Swisshelm was already an experienced, well known and controversial journalist. She founded the Pittsburgh Saturday Visitor where she expressed her anti-slavery and women’s rights views.

An unhappy marriage prompted her to leave Pittsburgh, with her young daughter, to join her sister’s family in St. Cloud. She became the editor of the St. Cloud Visitor and continued to voice views which were not always popular, particularly with Gen. Sylvanus B. Lowry, a prominent citizen.  After the destruction of her office in 1858, by his supporters, she soon started another paper, the Democrat, and continued to voice her strong opinions.

In 1862, the U.S. Dakota War impacted Swisshelm's views regarding the Dakota and she supported punishment and expulsion from the state.  In 1863, she traveled to Washington D. C. to speak in support of these views and worked as a nurse to wounded soldiers. She sold the Democrat to her nephew, started another newspaper, The Reconstructionist, and returned to Pittsburgh.  She continued writing and lecturing and died in Swissvale, Pennsylvania on July 22, 1884.