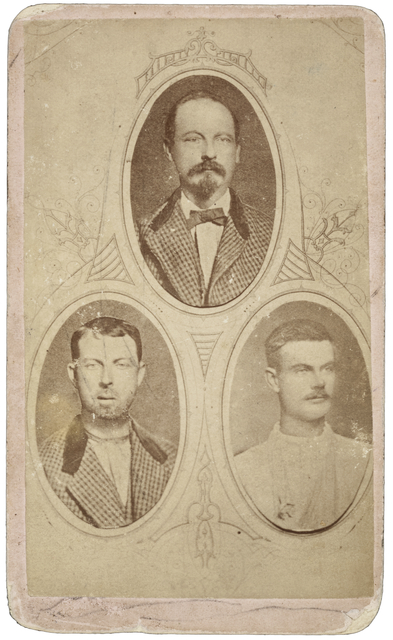 The Story of Cole Younger, by Himself. MNHS call number: Reading Room HV6446.Y7 A2 2000, also available for purchase.

On September 7, 1876, the James-Younger gang robbed the First National Bank of Northfield, Minnesota. Cole, Bob, and Jim Younger and Frank and Jesse James we among the members of this gang that robbed trains and banks following the Civil War.

At the First National Bank, they demanded the money from the vault and Joseph Lee Heywood, the bank clerk on duty, was killed when he refused to open the safe. When the townspeople were alerted they attacked the robbers, defending their town and their savings. In the melee that followed, Nicholas Gustavson, a Swedish town resident, was killed, as were gang members Clell Miller and William Stiles.

The pursuit of the gang went on for weeks and covered 400 miles. The Youngers were eventually captured at Madelia, Minnesota, in another gun battle, in which gang member Charlie Pitts was killed. The three Younger brothers were tried in Faribault, found guilty of murder, and sentenced to life in the state prison at Stillwater.

The Northfield Raid, as the robbery attempt has come to be known, has been the subject of countless novels and movies. It has inspired endless speculation and multiple theories of the sequence of events and who actually participated.