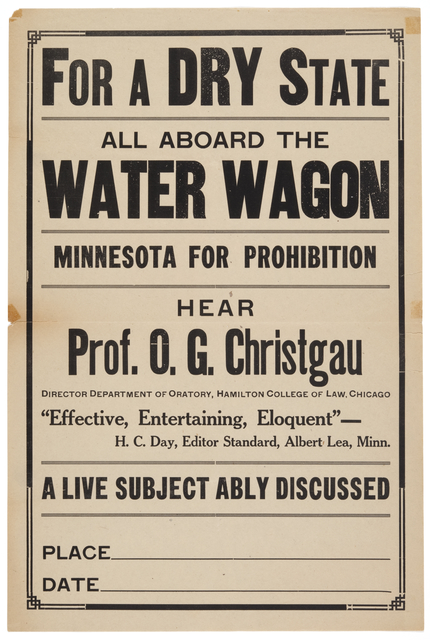 Andrew J. Volstead and Family Papers, 1868-1955.
This archival collection (1868-1955) consists largely of political materials of Volstead, a Granite Falls lawyer and Republican congressman (1903-1922). Much of the correspondence is dated 1920 to 1922 and concerns Prohibition, the National Prohibition Act of 1919 (the Volstead Act), and Volstead's 1922 re-election campaign; there are also copies of Volstead's speeches on Prohibition.
MNHS call number: Digital Finding Aid

Prohibition Party Records.
This archival collection (1876-1919) contains financial reports; minutes and memoranda of meetings and conventions, including Instructions for block captains, information on persons who contributed to the party, and the amounts contributed; letters soliciting support and donations; and other records of the Prohibition Party's administrative organization in Minnesota.
MNHS call number: Digital Finding Aid