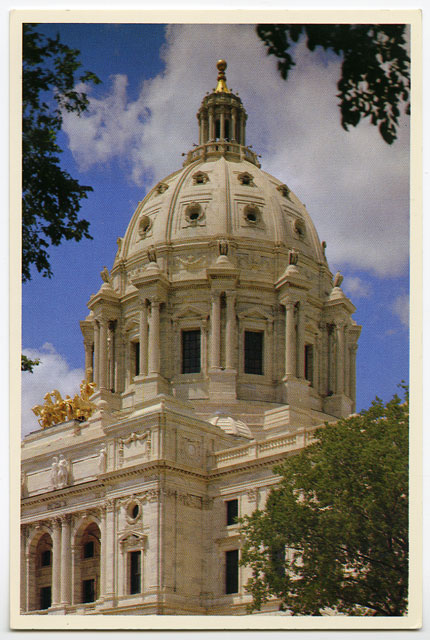 Minnesota's State Capitol building was designed by architect Cass Gilbert and was opened to the public on January 2, 1905. Inspired by Beaux-Arts design and the architecture of the Italian Renaissance, Minnesota's Capitol is one of Gilbert's most celebrated projects and is listed on the National Register of Historic Buildings. The Minnesota Historical Society has administered the State Capitol as one of its historic sites since 1969.

After the dome, one of the most prominent exterior features of Minnesota's Capitol is the Quadriga, a sculpture of a four-horse chariot sheathed in gilded copper. Titled "The Progress of the State," the sculpture is mounted on the front façade of the building just above six marble sculptures representing the six virtues (courage, bounty, integrity, prudence, truth, and wisdom). The interior of the building is distinguished by lighting and furniture also designed by Cass Gilbert, portraits of Minnesota governors, specially-commissioned artwork, murals, and the Rathskellar, a cafe in the basement decorated with frescoes.

In 2017 a comprehensive, four-year project to repair and restore the Capitol's exterior marble, roof, furnishings, and interior decorations was completed, and the building was re-opened to the public on August 11, 2017.