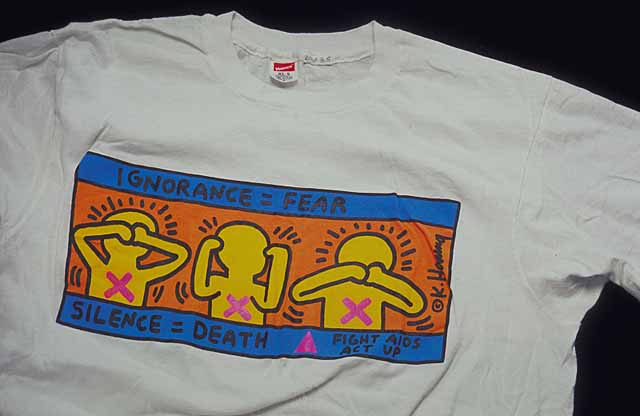 The Minnesota Response to AIDS, by Charles Herbert Backstrom.  Center for Urban and Regional Affairs: Minneapolis, Minn., 1992.
Report detailing AIDS related population statistics, response of Minnesota government and community groups to the crisis, HIV/AIDS and the media, public opinion of the disease, and a retrospective of how decisions on HIV/AIDS were made in Minnesota.
MNHS call number: RA 644.A25 B33 1992
Not Waiting for a Cure Oral History Project
Project documents Minnesota's response to AIDS from personal and sociopolitical perspectives. This collection includes nineteen narrations documenting the memory of those working in and lost to the epidemic. Interviews were conducted in 1994 and 1995, when the epidemic was entering its second decade.
MNHS call number: Transcripts and Digital Audio
Minnesota AIDS Project Newsletter
Minneapolis, MN: Minnesota AIDS Project.
October 1985 - December 1992.
MNHS call number: SERIAL1696
Mark O’Leary Papers
Visually interesting daily events sheets and drawing ideas kept by artist Mark O’Leary as memory aids to compensate for his short-term memory loss following an AIDS-related seizure in 1992.
MNHS call number: See finding aid in the library (P2592)

The beginning of the AIDS epidemic in the United States could be traced back to a Centers for Disease Control report in July of 1981, identifying a mysterious disease attacking the immune systems of five otherwise healthy, young, gay men in Los Angeles.  It would not take long for the disease to emerge in Minnesota when in May of 1982, Bruce Brockway (gay rights activist and former publisher of the St. Paul Positively Gay newspaper) became the first person in Minnesota to be diagnosed with HIV.

Throughout the 1980s, the medical community would struggle to understand and treat this disease as infections spread to epidemic proportions.  Fear and political indifference lead to isolation of AIDS patients as well as discrimination in education, employment, and housing.  Non-profit organizations such as the Minnesota AIDS project and the state Department of Health lead public education campaigns on how to prevent infections and also treatment and compassionate care for AIDS patients and caregivers.  Controversy arose in terms of how prevention efforts should be handled, particularly in regards to the privacy of infected patients' identities as well as safe sex versus abstinence messages in public education materials.

In the latter half of the 1990s and early 2000s, new infection rates for HIV were dropping in Minnesota and the United States in general. Existing patients were living longer, healthier lives thanks to the availability of new and improved drug treatments.  However, AIDS continues to spread throughout the world disproportionately affecting less economically developed countries and communities of color.  There is still no cure.