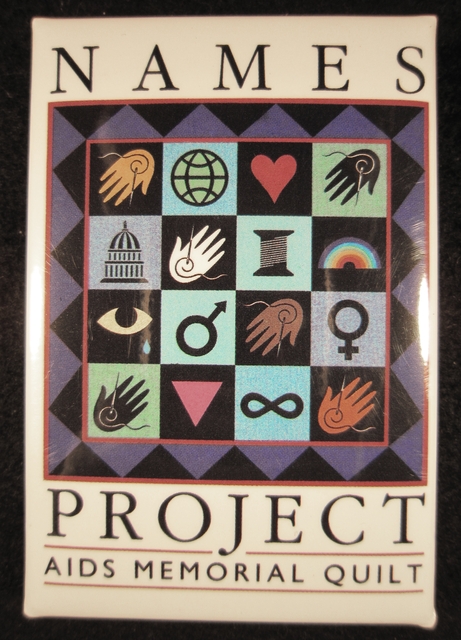 Brian J. Coyle Papers
Personal, political, and official papers documenting the life and career of a gay activist and Minneapolis (Minn.) city council member. Coyle was infected with HIV and his struggle with the disease and decision to publicly disclose his status are also documented (1989-1991).
MNHS call number: Digital Finding Aid

The Minnesota Names Quilt Project Report
Pictures of each panel for the Minnesota AIDS quilt along with biographical information on the people for whom the panels were made. Also included are some miscellaneous items: a small poster, news article, postcards of the AIDS quilt in Washington, DC., and a sticker from the displaying of the quilt in Washington, D.C.
MNHS call number: See finding aid in the library (P2685)

Not Waiting for a Cure Oral History Project
Project documents Minnesota's response to AIDS from personal and sociopolitical perspectives. This collection includes nineteen narratives documenting the memory of those working in and lost to the epidemic. The narrators discuss the reasons for their AIDS actions, the effect the epidemic has had on their faith, their commitments to other issues and their image of the United States. Interviews were conducted in 1994 and 1995, when the epidemic was entering its second decade.
MNHS call number: Transcripts and Digital Audio

Published Records and Reports.  Minnesota Department of Health.
Reports, newsletters, and miscellaneous print and near-print items of or about the department.  Nearly two boxes of material containing reports on the state of HIV/AIDS in Minnesota and documents on public health policy and prevention initiatives in the state.
MNHS call number: Digital Finding Aid