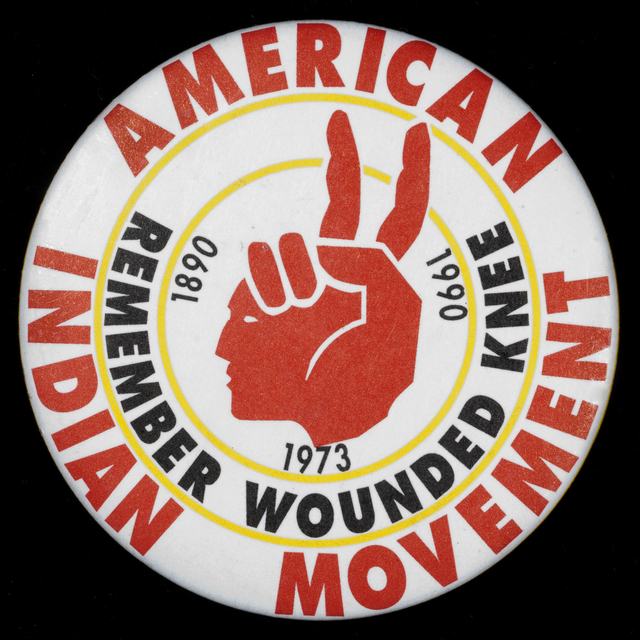 AIM—the American Indian Movement—began in Minneapolis, Minnesota, in the summer of 1968. It began taking form when 200 people from the Indian community turned out for a meeting called by a group of Native American community activists led by George Mitchell, Dennis Banks, and Clyde Bellecourt. Frustrated by discrimination and decades of federal Indian policy, they came together to discuss the critical issues restraining them and to take control over their own destiny. Out of that ferment and determination, the American Indian Movement was born.

AIM's leaders spoke out against high unemployment, slum housing, and racist treatment, fought for treaty rights and the reclamation of tribal land, and advocated on behalf of urban Indians whose situation bred illness and poverty. They opened the K-12 Heart of the Earth Survival School in 1971, and in 1972, mounted the Trail of Broken Treaties march on Washington, D.C., where they took over the Bureau of Indian Affairs (BIA), in protest of its policies, and with demands for their reform.

The revolutionary fervor of AIM's leaders drew the attention of the FBI and the CIA, who then set out to crush the movement. Their ruthless suppression of AIM during the early 1970s sowed the seeds of the confrontation that followed in February, 1973, when AIM leader Russell Means and his followers took over the small Indian community of Wounded Knee, South Dakota, in protest of its allegedly corrupt government. When FBI agents were dispatched to remove the AIM occupiers, a standoff ensued. Through the resulting siege that lasted for 71 days, two people were killed, twelve wounded, and twelve hundred arrested. Wounded Knee was a seminal event, drawing worldwide attention to the plight of American Indians. AIM leaders were later tried in a Minnesota court and, after a trial that lasted for eight months, were acquitted of wrongdoing.