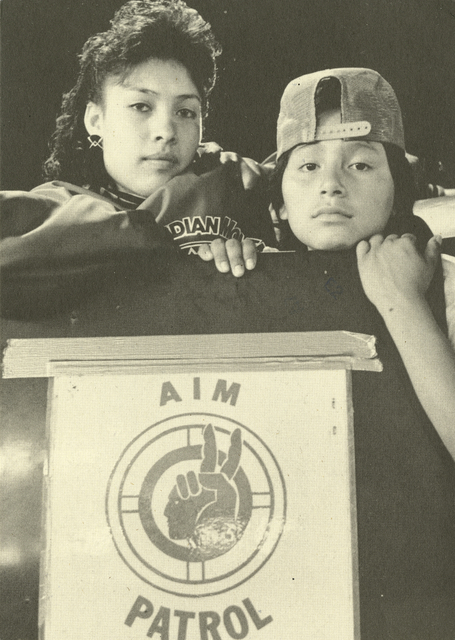 Wounded Knee Legal Defense/Offense Committee Records.
Records documenting the history, internal operation, and legal practice of a committee established by lawyers, legal workers, and others dedicated to the defense of activists involved in the American Indian protest movement of the 1970s. The bulk of the records relate to the occupation of Wounded Knee, South Dakota, by American Indian activists (Feb.-May 1973) and to the massive and complex legal proceedings that followed (1973-1976). Events leading up to and following the occupation are also documented, including a protest riot in Custer, South Dakota (Feb. 6, 1973), the widespread harassment and violence on the Pine Ridge Reservation after the occupation, a shoot-out at Oglala, South Dakota (June 26, 1975), which resulted in the death of two FBI agents, and the legal actions taken in order to prohibit the publication of author Peter Matthiessen's account of the Oglala incident.
MNHS call number: Digital Finding Aid

"Nokomis: Voices of Anishinabe Grandmothers," Sarah Penman, producer.
St. Paul, Minn.: Twin Cities Public Television and Sarah Penman, 1994.
Documents Ojibwe women's attempts to restore and preserve their Native American culture and heritage. They recall painful memories of growing up trying to conform to a white man's view of the world, a view that saw Indian ways as bad. They discuss the negative influence of the mission schools, the desecration of Indian sacred and ceremonial artifacts and grounds, and the movement by Indians to reassert their treaty rights.
MNHS call number: Videotape no. 586

A Good Day to Die, a Yocha Dehe Winton Nation production ; produced and directed by David Mueller and Lynn Salt.
New York, NY : Distributed by Kino Lorber, Inc., c2011.
Chronicles the life story of Dennis Banks, the Native American who co-founded the American Indian Movement (AIM) in 1968 to advocate and protect the rights of American Indians, providing an in-depth look at the history and issues surrounding AIM’s formation. From the forced assimilation of Native Americans within boarding schools, to discrimination by law enforcement authorities, to neglect by government officials responsible for the Bureau of Indian Affairs, AIM sought redress for the many grievances that its people harbored. Banks’ personal struggle culminated in major armed confrontations at Custer, South Dakota and Wounded Knee -- climactic flash points which saw him standing steadfast as a leader for his cause.
MNHS call number: DVD 72