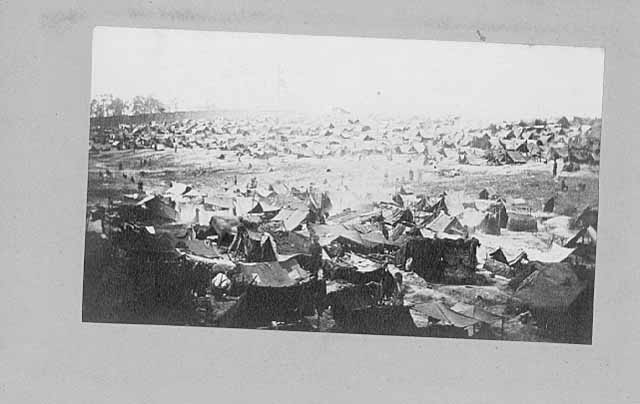 Daniel Bond Reminiscences
Bond’s handwritten reminiscences of his Civil War service (1861-1865) with the First Minnesota Infantry and as a prisoner of war at Andersonville, Georgia (1864-1865).
MNHS call number: See the finding aid in the library (Microfilm M165).

David Kennedy Diary
Two typed transcripts of the Civil War diary of a sergeant with the Co. G 9th Ohio Cavalry, primarily recording his experiences (May-Sept. 1864) as a prisoner in the Confederate prison camp at Andersonville, Georgia. The diary records camp living conditions, treatment by captors, the deteriorating health of the union prisoners, and the many deaths that occurred. The transcripts also contain portions of two undated letters from Kennedy and a newspaper article that give further information on the company’s capture and internment. The transcripts are accompanied by a photocopied roll of 90 union prisoners at Andersonville that Kennedy called each day.
MNHS call number: See the finding aid in the library (P519).

James M. Woodbury, Diary and Miscellaneous Letters and Papers
Diary of a soldier from Mower County, Minnesota who served in the Ninth Minnesota Infantry Regiment in Missouri and Mississippi until his capture by Confederate forces and his subsequent incarceration and death at Andersonville Prison. There are also letters written by Woodbury to his wife Amanda, and letters received by Amanda from a variety of relatives and friends. Entries by a second writer continue until October 9, some two months following Woodbury’s death at Andersonville. The diary speaks of "dismal" conditions at the prison; Woodbury’s removal to the prison hospital and his subsequent death (August 1862); the deaths of other men from the regiment; and the second writer’s eventual transfer from Andersonville to Florence Prison, South Caroline (September 1864).
MNHS call number: See the finding aid in the library (P1091).

Alexander G. Huggins and Family Papers
Mary Ann Longley Huggins married John Murray Kerlinger in 1870. Kerlinger was born in Baltimore in 1828. He was at the Lower Sioux Agency at the beginning of the 1862 U.S.-Dakota War and served in the defense of Fort Ridgely. He later joined the Union Army, was captured, and was incarcerated in the infamous Andersonville Prison. After their wedding, the Kerlingers farmed for a time near Mankato but soon moved to California, where John Kerlinger died in 1897.
MNHS call number: Digital Finding Aid