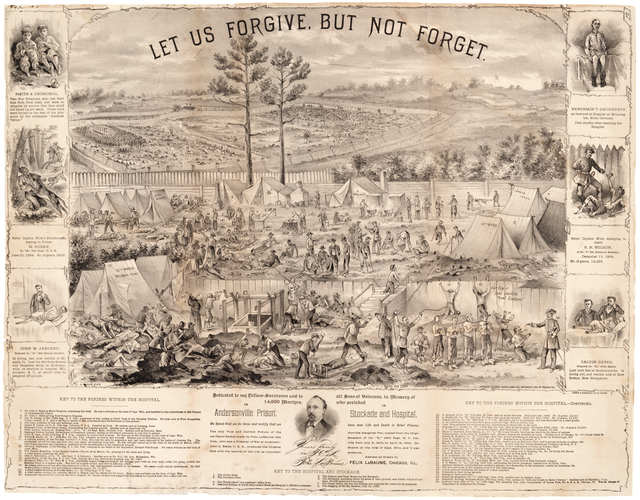 Andersonville the Story of a Civil War Prison Camp, by Raymond F. Baker, based on research by Edwin C. Bearss. Washington: Office of Publications, National Park Service, U.S. Dept. of the Interior, 1972. MNHS call number:  E612 .A5 B24

James M. Woodbury, Diary and Miscellaneous Letters and Papers Diary of a soldier from Mower County, Minnesota who served in the Ninth Minnesota Infantry Regiment in Missouri and Mississippi until his capture by Confederate forces and his subsequent incarceration and death at Andersonville Prison. Entries by a second writer continue until October 9, some two months following Woodbury’s death at Andersonville. The diary speaks of "dismal" conditions at the prison; Woodbury’s removal to the prison hospital and his subsequent death (August 1862); the deaths of other men from the regiment. MNHS call number: See the finding aid in the library (P1091)

Captured Civil War soldiers often found themselves in situations more perilous than the battlefield. The prison camps of both sides were unable to house the large numbers of prisoners confined in them. Overcrowded and unsanitary, they were breeding grounds of disease. Many men who came in as healthy prisoners died from these illnesses before they could be exchanged or released.

Some Confederate prisons were little more than open pens, where the problems of disease were aggravated by exposure and starvation.  The most notorious of these camps was Andersonville Prison (officially known as “Camp Sumter”) in Sumter County, Georgia in the southwestern part of the state. Here, tens of thousands of Federal prisoners were held in an open area covering 16 acres. Between February 1864 and March 1865, some 45,000 prisoners passed through Andersonville, and more than 12,000 of them died there.

A number of Minnesota soldiers were prisoners of war in Andersonville, and quite a few did not live through the experience. The collection of the Minnesota Historical Society includes accounts of survivors and some letters and diaries of men who did not make it, but were remembered by their comrades. The story of Andersonville and other Civil War prisons is a little told and tragic aspect of the war.