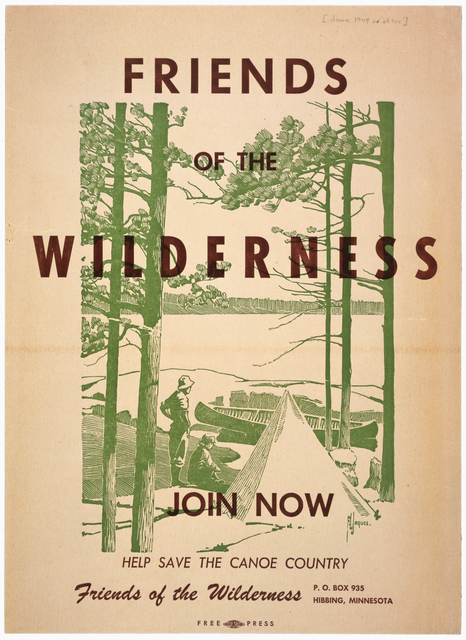 Papers Relating to the Friends of the Boundary Waters Wilderness (1970-1978) Contains newsletters, reports, fact sheets, maps, drafts of bills, printed material, and correspondence produced or collected by this coalition of conservation groups formed in 1976 to lobby for the preservation of the Boundary Waters Canoe Area in the Superior National Forest. MNHS call number: Digital Finding Aid

The Boundary Waters Canoe Area Wilderness is a 1,090,000-acre wilderness in northeastern Minnesota.  The protection and conservation of the BWCA has been an issue since the turn of the 20th century.

Who owns the land, water, forests, and wildlife in the wilderness area along the international boundary between Minnesota and Canada? Whose right is it to determine the use and disposition of its rich resources? To what purpose, in whose interests, and by what authority should mandates be created?

Battles over the private vs. the public good, recreation vs. industry/trade, freedom vs. control, motorized vs. non-motorized recreation have been waged over the BWCA for over 100 years.  Major figures in these ongoing efforts included people like Christopher C. Andrews, Edward W. Backus, Ernest C. Oberholtzer, and Sigurd F. Olson.