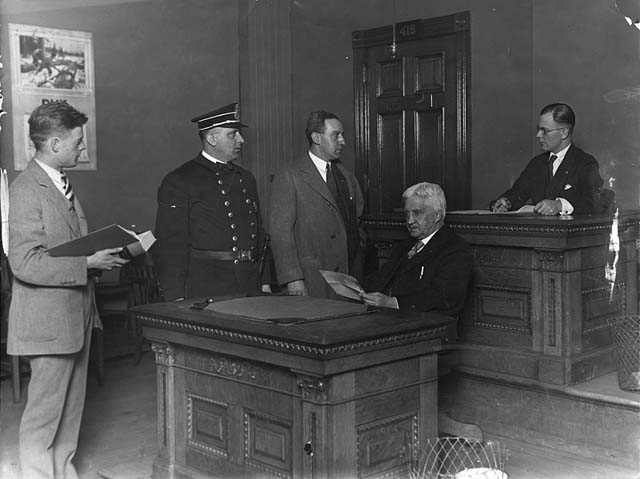 Justice Courts -   Justice of the Peace courts had limited jurisdiction generally covering a city, town or township.  Cases heard in these court could be civil or criminal matters but were generally of a minor nature - misdemeanors, small claims, etc.  As courts of record, however, their files sometimes included naturalizations and marriages.  The office of Justice of the Peace was abolished in 1977.

Municipal Courts -  Many cities and towns had their own local court which handled a variety of cases, including traffic offenses, violation of local ordinances, and small claims.

Family Courts - Many district courts have a "family division" or "family court" to hear matters relating to families and children.  These include divorce decrees, child support decrees, and a few name changes, paternity judgments, and miscellaneous money judgments.  Access to these records is restricted.

Courts of Commons Pleas -  For a brief time, from about 1867 to 1876,  Ramsey County had a Court of Common Pleas, which handled civil and criminal cases during a time when the Ramsey County District Court was overloaded with cases and the Minnesota Constitution did not allow for the appointment of a second judge.  For the same reason Hennepin County had a Court of Common Pleas between 1872 and 1877.

Juvenile Courts -  These courts were created in 1919 to deal with delinquincy matters and cases relating to child welfare - neglect, abuse, etc.  Our holdings do not include case files, but there are some indexes and registers in the county court records.  Access to the records of the Juvenile Courts is restricted.

Tax Court -  Originally established as a Board of Tax Appeals in 1939, the Tax Court is an independent agency within the Department of Revenue.  The court has the power to review and redetermine orders or decisions of the commissioner upon appeal.  Appeals may be made with respect to taxes, fees, or assessments by an affected person, political subdivision of the state, or by the Attorney General on behalf of the State.

Workers' Compensation Court of Appeals - Evolving from the Workmen's Compensation Commission created in 1967, the Workers' Compensation Court of Appeals exercises appellate jurisdiction not only in all cases and matters under the Minnesota Workers’ Compensation Law, but also for cases under the laws governing employees who contract tuberculosis and the Peace Officers Killed in Line of Duty Law. Appeals to the court are filed with the Office of Administrative Hearings or with the Department of Labor and Industry, as appropriate. The decisions of the court are subject to review only by the Minnesota Supreme Court.

Other court records can be found by searching the library catalog using as search terms the court name or the city and/or county and court for local courts. Some of the court records have online finding aids.

The types of records found for justice courts, municipal courts, family courts, and courts of common pleas are similar to those found for district courts.  These record types include:

For the Courts of Common Pleas there are also case file records.

For the Tax Court, the main series of records is the closed [completed] decision files for which there is also an index.

Most records for other Minnesota Courts are open with the exception of family courts and divisions and juvenile courts.

Juvenile court records are the most restricted and require a court order from the judge of the district court in the county where the records were created.

District/county court case files can be ordered via the District/County Court Case File Research Request  page at our online store. Please include any and all information you have about the record you are looking for.

Note: Researching in the records of the Other MN Courts listed on this page can very complicated and involved.

About Other Minnesota Courts