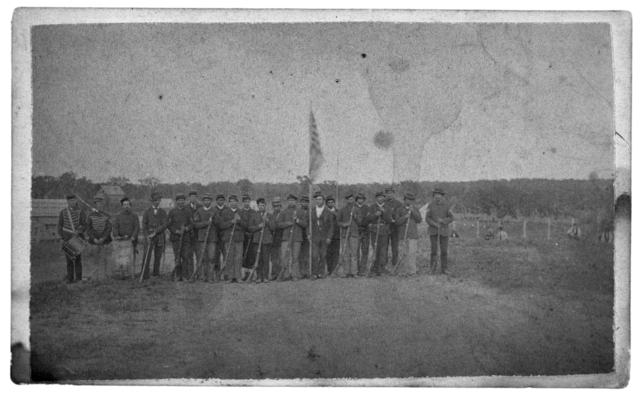 Infantry were the backbone of Civil War armies, and most of the men who served were in this branch.  The basic infantry unit was the Regiment consisting of 10 companies each containing 60 to 100 men.  The companies were designated "A" - "K"  with the letter "J" omitted to avoid confusion with the letter "I".  A regiment was commanded by a colonel, with a major as second in command.  Each company was commanded by a captain with a first and two second lieutenants.

Regiments were known by their state of origin and the order in which they were created, thus the 1st Minnesota was the first of the infantry regiments raised in our state, while the 20th Maine was the 20th regiment recruited from that state.  All of the units were referred to as Volunteer Infantry to distinguish them from regular U.S. Army troops, which were made up of enlistees and draftees from many states.  These were referred to as U.S. Infantry and designated by the order in which they were authorized by Congress.

Regiments were grouped together in a larger unit called a brigade.  There could be three to five regiments in a brigade depending on the the size of the regiments.  A brigade usually included 1,500 to 2,000 men and was commanded by a Brigadier General.  Although Brigades might be designated by number, they were often referred to by the name of their commanding officer.

Brigades were organized into larger units known as a division. Each division contained two to five brigades along with artillery . A division was also commanded by a senior Brigadier General.  Though officially given a numerical label, like "Second Division," they were frequently referred to by the name of the commanding officer.