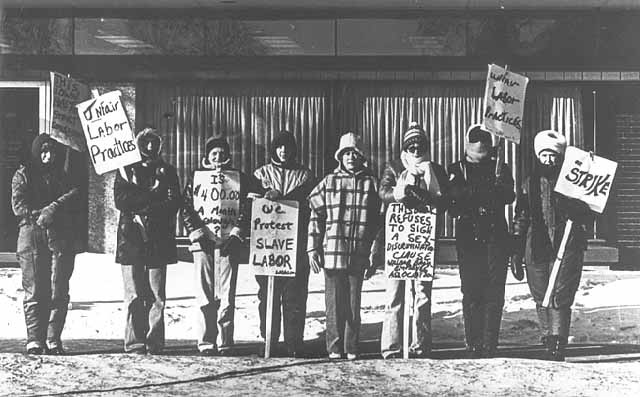 The Willmar 8: A Film About Working Women, video recording
Directed by: Lee Grant
Produced by: California Newsrell/Media at Work, San Fransisco, CA: 1979.
Tells the story of eight women bank workers in the small town of Willmar, Minnesota who found themselves in the forefront of the fight for working women's rights.
MNHS call number: Film Use Copy A-54

Kathleen A. Olson Papers, 1969-1992
Papers of a Minnesota feminist documenting her participation (1970-1980) in voluntary organizations dedicated to achieving full rights for women and the elimination of sexism and sex discrimination in Minnesota schools, and her involvement (1980-1984) with University of Minnesota committees working under terms of the Rajender consent decree to end sex discrimination by the University in the hiring and promotion of women faculty and academic staff.
MNHS call number: Digital Finding Aid

When researching the history of sex-based discrimination and harassment in the workplace, it’s important to note that what you don’t find may be as telling as what you do.  First of all, most of the information which is more easily found relates to official court cases. Driven by women's increased participation in the labor force following WWII, federal legislation outlawing sex discrimination in the workplace was not passed until the 1960s (with title VII of the 1964 Civil Rights Act and the 1963 Equal Pay Act, respectively). So, although discrimination and harassment in the workplace did happen prior to this time, it is not as acknowledged in our written records.

Documentation was also frequently driven by one’s socioeconomic status and race. For example, the experience of Minnesota congresswoman Coya Knutson and the discrimination she faced in her political career is much more documented than the experiences of an enslaved woman at Fort Snelling.

Key cases highlighted in this guide include:

Telling the story of gender discrimination and sexual harassment in Minnesota also involves the broader feminist movement of the 1970s and the organizations dedicated to achieving women’s equality in the workplace and beyond.  So records from these Minnesota-based organizations as well as the units of state government that were dedicated to this anti-discrimination work are featured here.

The following definitions may be helpful in conducting research.  Keep in mind that language on this topic has evolved significantly since the 1970s including the how the terms "gender" and "sex" are used.  When conducting historic research,  note that a great deal of the material is cataloged as "sex discrimination" and/or "sexual harassment".