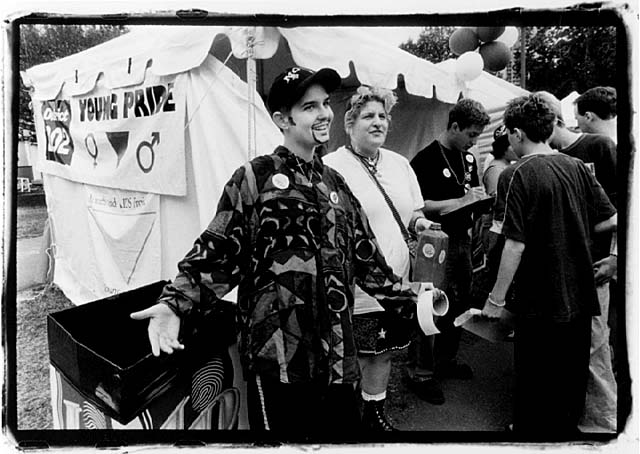 Coffeehouse Collective Records. Correspondence, minutes, financial statements, calendars, flyers, contracts, a mailing list, and a directory of performers that document the history of one of the first women's coffeehouses in the U.S. The coffeehouse was promoted as "a chemically-free meeting place for all women, which supports and nurtures the social, cultural, and political life of the Twin Cities lesbian community." A Woman's Coffeehouse originally opened in late 1975 as a fundraiser for the Lesbian Resource Center. The Coffeehouse Collective assumed management in early 1976 and operated the coffeehouse until its closing on Sept. 9, 1989. Topics include the collective's philosophy, routine management, hiring of collective members, fund raising, publicity, programming-which included live performances, dancing, and political or educational presentations, and the coffeehouse's dissolution. MNHS call number:  Digital finding aid

Integrity National Convention Records.
Orientation materials, including schedules, a letter of welcome, budgets, reports, and other materials for the annual national convention of Integrity, an organization of lesbian and gay Episcopalians and their supporters working for the full inclusion of homosexual persons in the Episcopal Church.
MNHS call number: See finding aid in library (filed under P970).

Minnesota Committee for Gay and Lesbian Rights Records.
Board and annual meeting minutes, news clippings, financial data, office logs, correspondence, lobbying files, and other records of an organization formed in 1974 to work for passing local ordinances and state laws guaranteeing rights for gays and lesbians, to combat homophobia and violence against gays and lesbians, and to educate the public and legislature about gay and lesbian issues.
MNHS call number: Digital finding aid

Project 515 Records, 2005-2013
Paper and electronic records of a Minneapolis-based organization working to achieve equal rights for same sex couples under the law, particularly through the defeat of a proposed amendment to the Minnesota constitution that would have proscribed same-sex marriage and the subsequent passage of legislation that opened marriage to all couples. Includes articles of incorporation and bylaws, minutes, correspondence and memoranda, committee files, financial data, files of directors and key officials, digitized interviews with board members, information about donors and community support, publications and promotions, and files about related organizations with which Project 515 cooperated.
MNHS call number: Digital Finding Aid

Brian J. Coyle Papers.
The papers document Coyle's political career from the mid-1960s, when he became active in the New Left, through his membership in the New American Movement (1972-1974), his work as a tenants' rights activist (1974-1981), and his tenure on the Minneapolis city council as sixth ward alderman (1984-1991). The papers also reflect Coyle's membership in a number of gay organizations and work on gay-related issues such as violence against gays (1984-1987), the promotion of gay elected officials, sponsorship of a domestic partnership ordinance (1983-1991), and AIDS prevention and treatment (1986-1991). Coyle was infected with HIV and his struggle with the disease and decision to publicly disclose his status are also documented (1989-1991).
MNHS call number: Digital finding aid

Wallace K. Swan Papers.
The papers document Swan's selection as a presidential elector, his unsuccessful election bid for the Minneapolis Public Library Board, his election to the Minneapolis Board of Estimate and Taxation, and his activities as a member of the American Society for Public Administrators. The papers also reflect Swan's active role in the Minneapolis gay community as a parent, church member, patron of the arts, and civil rights advocate. Topics include Swan and his partner's registration as the first male partners to register under the Minneapolis domestic partners ordinance (1991), his work as co-chair and secretary of the Northland Business Association, the 1987 March on Washington for Lesbian and Gay Rights, and Stonewall 25, an international march on the United Nations (1994).
MNHS call number: See the finding aid in the library (P2138).

Lesbian Elders Oral History Project Interviews.
The interviews explore the lives of seven women who lived lesbian lives before 1969. The women recount many aspects of their lives during this time: the process of coming out, support networks for lesbians, public places in the lesbian community, language and identity, the process of growing old, and changes in the lesbian community over the years.
MNHS call number: Transcripts and Digital Audio

Not Waiting for a Cure Oral History Project Interviews.
In the early 1980s, Minnesota began to struggle with a new public health and social challenge: Acquired Immune Deficiency Syndrome, or AIDS. The project documents Minnesota's response to AIDS from personal and sociopolitical perspectives. This collection includes nineteen narrattives documenting the memory of those working in and lost to the epidemic. The narrators discuss the reasons for their AIDS actions, the effect the epidemic has had on their faith, their commitments to other issues and their image of the United States. Interviewees include: Roy Schmidt, Violetta, Father Vincent Schwann, Robert E. Tracy, Sharon Day, and Patrick Scully.
MNHS call number: Transcripts and Digital Audio

Twin Cities Gay and Lesbian Community Oral History Project Interviews.
These interviews look into the lives of eight people connected with the local gay/lesbian community from the 1940s to the advent of AIDS in the early 1980s. Throughout the interviews, the narrators recount: early impressions of what they thought homosexuality was, personal experiences of how they came to terms with their sexuality, where they socialized with other lesbians and gays, and the overall social environment they experienced in the Twin Cities. Interviewees include: Richard Bosard, Dennis E. Miller, Koreen Phelps, Ashley Ann Rukes, Allan Spear, Leo Treadway, Jean-Nicholas Tretter, and Kerry Woodward.
MNHS call number: Transcripts and Digital Audio

Saint Paul Department of Human Rights, Correspondence, 1968-1982.
Correspondence of Donald Lewis, deputy director (1968-1972) and director (1972-1980), and Judy Goodman, assistant director (1974-1975). The files, which also contain minutes and notes of some department meetings, procedural memos and directives, meeting confirmations, and data from various surveys and studies, cover such topics as affirmative action, the City of St. Paul Civil and Human Rights Ordinance, testimony before the state legislature, attendance at the national convention of the National Association for the Advancement of Colored People (NAACP), speaking engagements, requests for information, seminars given for city employees, and discrimination involving the LGBT community.
MNHS Call Number: See finding aid in the library (filed under Ramsey County: St. Paul: Human Rights Department)

Stay with Me, 1982
Film produced, written, narrated and edited by Ellen Roe Anthony about Karen Clark (nurse, community organizer & lesbian) who was elected to the Minnesota House of Representatives in 1980 by South Minneapolis district 59-A.
MNHS Call Number: Video Tape Use Copy #59