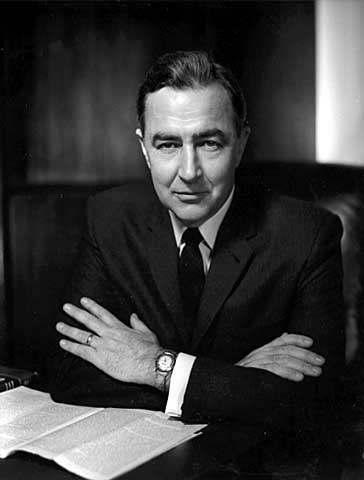 Papers Relating to the 1968 Democratic Convention, collected by Lyle D. Tollefson. Included are items used to promote the campaign of Senator Eugene J. McCarthy, clippings providing information on the McCarthy family, a list of the Minnesota delegation, copies of platform planks, a telegram from Tollefson to Vice President Hubert H. Humphrey regarding the disorder in Chicago during the convention, and Humphrey's response, a copy of Humphrey's address accepting the nomination as Democratic candidate for president, copies of press releases, brief biographies of prominent Democrats, and other miscellaneous items.  MNHS call number: See finding aid in the library (P618).

One of the most distinguished politicians in Minnesota history, Eugene McCarthy was born in Watkins, Minnesota, in 1916. After a brief stint as a professor, McCarthy turned to politics and represented Minnesota in the House and the Senate from 1949 to 1971, where he gained a reputation as an intellectual.

In 1967 he announced his candidacy for the Democratic nomination for the presidency as a direct challenge to Lyndon Johnson's Vietnam War policies. His antiwar position won the support of many liberals and his strong showing in the primaries persuaded Johnson to leave the race.  After Robert Kennedy's 1968 assassination, McCarthy lost the nomination to Vice President--and fellow Minnesotan--Hubert H. Humphrey.

McCarthy unsuccessfully ran for president a total of five times.  Though he never served in the Oval Office, he is remembered for his strong convictions and integrity.