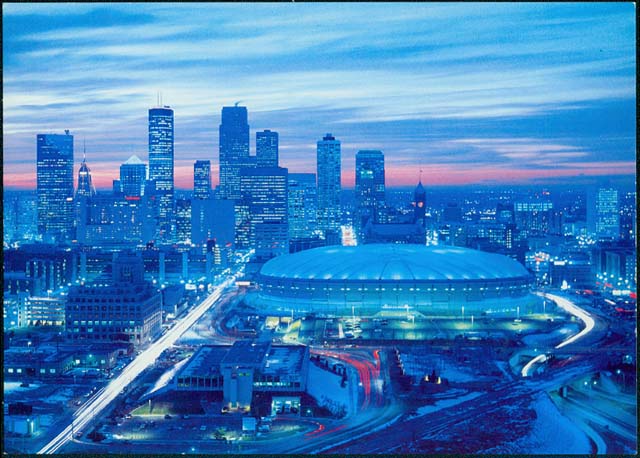 The Hubert H. Humphrey Metrodome Souvenir Book: A Pictorial History of the Twins, Vikings, Gophers, Millers, Saints--and Metrodome!, compiled by Dave Mona.
MNHS call number: GV416.M5 H83
"Building the Metrodome," by Stew Thornley.
In Construction Bulletin (Minneapolis, Minn.), vol. 241, no. 10 (Mar. 5, 1993): pp. 8-10, 12, 19. MNHS call number: TA1 .I3 v.241:10
Minneapolis (Minn.).: A Multi-Use Sports Arena in Minneapolis, prepared by the City of Minneapolis in cooperation with the Greater Minneapolis Chamber of Commerce and the Minneapolis Downtown Council.
A bound series of reports and studies on the development of the Metrodome.
MNHS call number: GV431.M5 M52
Metropolitan Council of the Twin Cities Area.: Metrodome Study Records, 1973-1982.
Memos, meeting notices and minutes, reports, public hearing records, and related materials documenting the council’s Special Committee on Sports and Cultural Facilities (1973-1974), whose purpose was to hold hearings and prepare a report on the development of major sports and cultural facilities, including a domed stadium.  MNHS call number: See the finding aid in the library (Metropolitan Council).
Views of the Metrodome, U.S. Bank Stadium, and East Town, Skip Hassman photographer.  Collection includes digital images taken by hobby photographer, Skip Hassman, documenting the Hubert H. Humphrey Metrodome before and during demolition; the construction of US Bank Stadium, construction workers, a few of the first events held at U.S. Bank Stadium; and views of East Town during these changes to downtown. MNHS call number: Digital Finding Aid

In the late 1960s, architect Robert Cerny shared his vision of a domed stadium in downtown Minneapolis. Metropolitan Stadium in the suburb of Bloomington had been home to Minnesota's professional football team, the Vikings, and professional baseball team, the Twins, since 1961. However, by the early 1970s, the Vikings felt the venue was not optimal for football and the team began exploring other options, beginning a decade-long debate over the building of the Hubert H. Humphrey Metrodome.

By 1975, the leases for the Twins and Vikings were due to expire at Metropolitan Stadium. The public feared that without a larger, modern stadium, the Vikings would leave Minnesota. Nevertheless, most Minnesotans felt that if a new stadium was built, it should not be paid for by taxpayers but through stadium-use fees. There was also opposition to building the stadium in downtown Minneapolis, further fueling the debate.

In the end, the Metrodome was funded through the sale of 30 year bonds, a limited hotel-motel and liquor tax, local business donations, and payments established within a special tax district near the stadium site. It was completed on-time and under-budget for $55 million, opening in April 1982 for the Twins’ season opener. Built to withstand the extremes of Minnesota weather, the Metrodome was constructed with a fiberglass fabric roof self-supported by air pressure. Although the roof (and the Metrodome itself) had its ups and downs during its 31-year tenure, the stadium was home to a wide variety of events.

Over time, the Twins and Vikings began to outgrow the facility. In May 2006, the Minnesota legislature passed the necessary funding measure for Target Field, an outdoor baseball stadium for the Twins. Following suit, on March 1, 2012, an agreement was reached for the Vikings to build a replacement football stadium to be located on the site of the Metrodome.

On January 18, 2014, the Metrodome roof was deflated, forever altering the Minneapolis skyline. Demolition of the Metrodome was completed on April 17, 2014, four weeks ahead of schedule. U.S. Bank Stadium, the new Vikings stadium opened on July 22, 2016, beginning a new era of stadium memories, including hosting Super Bowl LII in 2018.