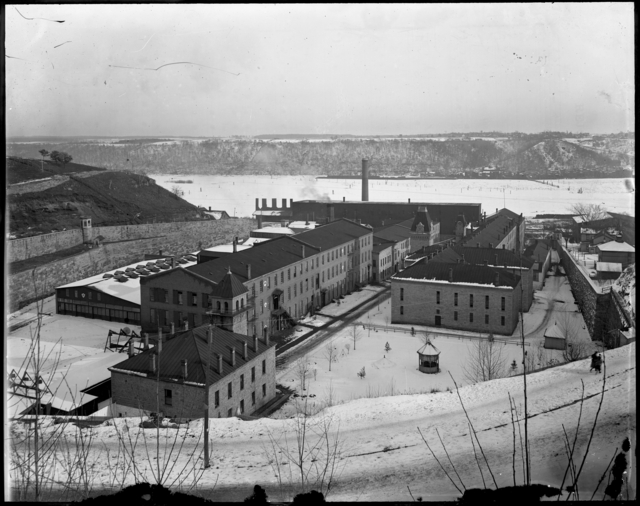 The Minnesota State Prison at Stillwater, now a maximum security facility for adult male felons, was established by an act of the territorial legislature in February, 1851. It would begin to receive inmates three years later in 1854. By the turn of the century, the prison was facing serious overcrowding, and legislative appropriations were made to build a new prison on a 160-acre site two miles south of the old prison. It opened in 1912 with five cell buildings, a dining hall, chapel, hospital, greenhouse, two factory buildings, and two warehouses in a walled complex.

The leasing of prisoners was allowed until 1895, thereafter, only the sale of finished goods from the prison’s own shops was permitted. Prison shops produced twine, shoes, high school scientific apparatus, farm machinery, and other farm equipment. The prison industries program continues to produce twine and farm machinery.

Until the establishment of the Shakopee State Reformatory for Women in 1920,  the Stillwater prison also received female convicts, and employed a matron to supervise them and attend to their needs.

At the time of its establishment, the prison was managed by a warden and a three member Board of Inspectors. The board also established prison rules and prescribed punishments for infractions thereof. The warden was appointed by the governor for a two-year term and was responsible for the day-to-day administration of the prison. In 1901 the Board of Managers was superseded as the controlling authority by the State Board of Control which met monthly at the prison, primarily to review parole requests. In 1959 the authority was transferred to the newly created Department of Corrections.

Records for the Minnesota State Prison Stillwater can be viewed in person at the library or ordered online from our Correctional Institution (Prison) Records Request.

Case Files (Discharged Inmate Files), 1890s-1979
Correspondence, reports, administrative forms, and related papers documenting the incarceration, parole, and discharge of prisoners. May include the admittance record; correspondence with the sentencing court and with relatives; record of the inmate’s work, discipline, and other activities while in prison; physician’s reports; correspondence with criminal justice agencies in other states; photograph; and parole reports. Recent files tend to be more fully documented than earlier files. The files cover inmates admitted through 1972 and subsequently discharged. They date mainly from 1901, when a new numbering system was instituted and a formal set of case files begun; files prior to 1901 are scattered and incomplete.
MNHS call number: Digital Finding Aid

Commitment Papers, 1880-1978
Files containing the legal document (mittimus) committing a convict to prison, often accompanied by other legal and procedural documents. These may include copies of the minutes of conviction, sentencing, and commitment proceedings; trial transcript; lists of jurors and witnesses; transfer document from a county jail or other facility to the Stillwater prison; and/or petitions, orders, judgment rolls, and other legal or court documents.
MNHS call number: Digital Finding Aid

Inmate Medical Case Files, 1900-1972
The files contain the record of medical treatment and care for each inmate during his or her incarceration at Stillwater. Most include a one-page record of a physical examination performed upon admission to the prison; listing register number, name and known aliases, race, date admitted, crime, age, county received from, length of sentence, and former occupation. Nationality, date and place of birth, time as Minnesota and U.S. resident before the crime, father’s and mother’s name and place of birth, and incidences of insanity, tuberculosis, and cancer in the immediate family are noted as well. The form also records the physical and mental condition of the inmate on admission and discharge. Deaths and causes of deaths also are recorded.
MNHS call number: Digital Finding Aid

Inmate Register Sheets, 1880-1978 (bulk 1915-1978)
Admission (registration) data and details of each inmate’s background and behavior in prison, including information about his crime and trial, prior arrests, family background, misconduct in prison, visitors while in prison, and parole.
MNHS call number: Digital Finding Aid

Convict Registers, 1854-1902
Arranged by inmate register number in three series: unnumbered (1854-1858); Nos. 1-5688 (1859-August 1901); Nos. 580-899 (September 1901-November 1902). Registration data on inmates upon entering the prison. Each entry lists inmate’s name, register (inmate) number, county of admission, date of admission, crime, age, state or country of birth, and date of discharge. Later entries were expanded to include occupation, religion, education, nationality of parents, and names of other prisons where the inmate had served time. In cases where the county of admission is blank, the majority were sentenced from federal or military court.
MNHS call number: Digital Finding Aid

Convict Record, 1876-1915
Admission data and details on the inmates’ time in prison, including a record of solitary confinement, good time lost, and parole and discharge. Also included is some of the information already listed in the convict register, such as occupation, physical description, place of birth, crime committed, and register (inmate) number.
MNHS call number: Digital Finding Aid.

Photographs of Inmates (Glass Plate Negatives), 1895-1919 and 1926-1929
Both a side and front view of each inmate are included on each plate. Some negatives are missing. Some of the photos appear to have been taken by John Runk of Stillwater. Each negative is numbered. Some are the inmates’ case file numbers, photographed on a "menu-board" under the inmate’s chin. Others are written onto the glass plate in white ink; they are assumed to be the inmates’ case file numbers.
MNHS call number: Digital Finding Aid

Photographs of Inmates (Positives), 1895-1954
Both a front and side view of each inmate are included on each photograph. The back of each photograph includes the inmate’s name and number, aliases, description, county, crime, and F.B.I. number. The series is incomplete and does not include a photograph for every inmate.
MNHS call number: Digital Finding Aid

Photographs of Inmates (Negatives), 1930s-1970s
Both a side and front view of each inmate are included on each negative. Case file number is on a "menu board" below the inmate. Later negatives are labeled with "Minnesota State Prison" and the inmate’s last name, case file number, height, weight, date of birth, and assumed date of incarceration. The inmates are in prison uniforms and/or street clothes. Some inmates have one or more negatives from multiple incarcerations. There are gaps in the series and some of the earlier negatives are in brittle condition. Dates are either not documented, sporadically documented (late 1930s - early 1960s), or consistently documented (late 1960s-1970s).
MNHS call number: Digital Finding Aid