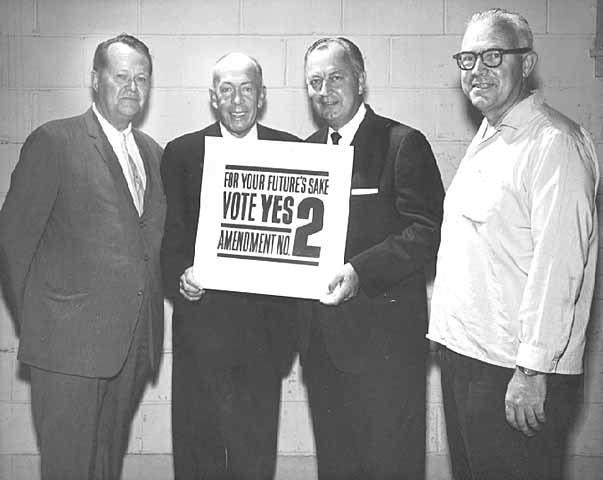 Republican Party (Minn.) State Central Committee Records, 1935-1977. The Gubernatorial Recout Files were created by the staff of the Republican Party's recount headquarters during the official recount of ballots and subsequent court trial. These files provide a comprehensive, in-depth picture of the Republican side of the effort to establish the legal victor in the 1962 Minnesota gubernatorial contest. In general, the materials are divided into three major categories: 1) background, informational, and housekeeping files, 2) ballot counting records, and 3) trial documents.  MNHS call number: Digital Finding Aid

Oral History Interview with Karl F. Rolvaag
Rolvaag discusses his family and early life in Northfield, Minn., his education and military career, and his involvement with Minnesota politics and government. He discusses his involvement with the Democratic Farmer Labor Party, his terms as lieutenant governor, his governorship, his relationships and impressions of other state officials and politicians, including his views on the 1962 and 1966 gubernatorial campaigns, and his evaluation of the DFL Party following the 1978 election and the Fraser-Short rivalry.
Interviewed by Mark Haidet on December 11 and 12, 1978 at Rolvaag’s home on Bowstring Lake, near Deer River, Minn.
MNHS call number: Digital Transcript and Recording

In the 1962 race between Lieutenant Governor Karl Rolvaag and Governor Elmer Andersen, the usual stakes were raised just a little bit higher. It would be the first time in Minnesota’s history that the winner would hold a four-year term.

On Election Day, November 6, 1962, 60% of eligible voters—1.3 million—cast ballots in spite of a driving snowstorm in the northern part of the state. Forty percent of those votes were hand-cast ballots. The returns created a seesaw as they came in over the next two days. Initial official returns gave Rolvaag a 59-vote plurality.

The State Canvassing Board met on November 26th and immediately made things worse by splitting three ways on who won and how to proceed. The Supreme Court intervened, ordering the board to accept amended reports from ten counties. On December 3, Rolvaag filed a Notice of Contest with the Clerk of the District Court in Freeborn County beginning an unbelievably complicated political, legal, and physical process.

Chief Justice Oscar Knutson resented an implication in the national press that, since the majority of Supreme Court appointees had been promoted by Andersen, they would rule in his favor. Knutson directed both parties’ recount managers to name a mutually-agreeable three-judge panel to oversee the recount. The selection of Judges Sidney Kaner, J. H. Sylvestre, and Leonard Keyes was the single most important key to carrying out a just and orderly process. That panel, in turn, created 100 recount teams of three consisting of a partisan for each side and an independent.

First both sides agreed that machine vote totals were correct. Then 97,000 hand ballots were challenged. Screening reduced the numbers to 22,000 and finally the three-judge panel was presented with 3,851 ballots for a trial that began on February 25, 1963. Disputed ballots were arranged into 24 categories—such as ballots marked for two candidates, Braatz or “unusual voting marks” like a star, that could be interpreted as an obliteration of an unintended vote.