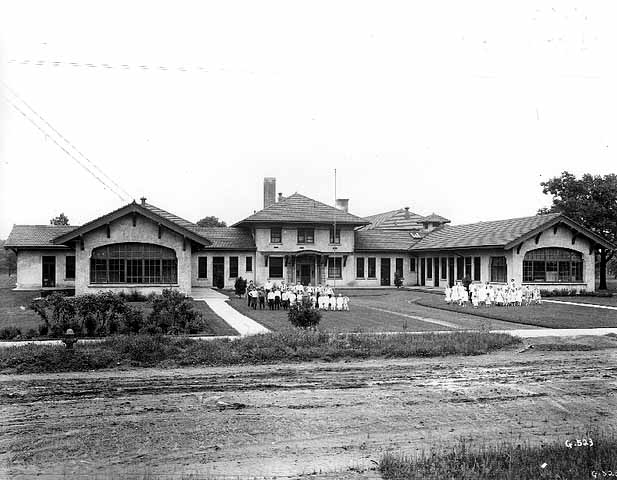 Gillette Hospital was established as the State Hospital for Indigent, Crippled, and Deformed Children, due to the efforts of its founder, Dr. Arthur J. Gillette, to entrust the state with the care of children with orthopedic disorders whose parents could not afford treatment. By 1905 it was apparent that a separate, special institution was needed for the care of crippled children, and the legislature appointed a commission to investigate this need. The St. Paul Business League and Commercial Club, and certain other citizens of St. Paul donated land adjacent to Phalen Park, and it became the new site for the hospital in 1907. Construction of a fresh-air sanatorium and educational and industrial school building was completed in 1913. Patients were transferred gradually to the new facility. In 1914, staff members included Dr. Gillette, as chief of staff, two orthopedic surgeons and an associate chief surgeon, a hospital superintendent, and a general head nurse. Many patients were confined to the hospital for several months or years; hence, an education program from kindergarten to post-high school was provided and the school was staffed accordingly. In 1925, as a memorial to Dr. Gillette, the hospital became known as the Gillette State Hospital for Crippled Children. In 1971, the name of the hospital was changed to the Gillette Children’s Hospital as a result of the diversity of cases being admitted. In 1973, the Gillette Hospital Authority was established as a public corporation in the executive branch and a political subdivision of the state. Currently, it is governed by the Gillette Hospital Board, consisting of the Commissioner of Public Welfare and six members appointed by the governor, with the consent of the senate.

Unrestricted patient records for the Gillette State Hospital for Crippled Children can be viewed in person at the library. More information on scheduling an appointment can be found here.

Miscellaneous Records, 1900-1980
Correspondence from former patients describing their experiences at the hospital (1962-1978), a variety of historical and informational booklets, newspaper clippings (1906-1976), an alumni reunion invitation (1976), a patient newsletter (1944), and an article by Dr. Arthur J. Gillette on the care of indigent crippled children (1900).
MNHS call number: Digital Finding Aid