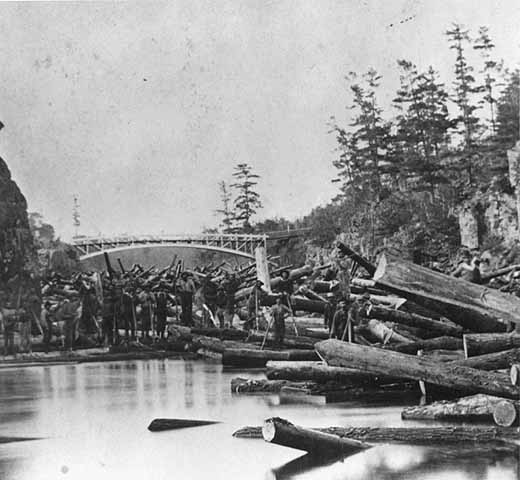 James Taylor Dunn and Family Papers.  Personal and family papers of James Taylor Dunn, his family, and others. Dunn's papers document his lifelong interest in the St. Croix River and valley, as well as several other areas of historical research. MNHS call number: Digital Finding Aid

The St. Croix River Valley has been many things to many people. Abundant environmental resources and the river's use as efficient transportation have made the region the scene for life, conflict, commerce, political dispute, and recreation.

For its first historic inhabitants, the Dakota, the valley provided valuable hunting grounds, wild rice, and other resources. By the 18th century, Ojibwe people were also living in the region. The valley would later become the site of bitter warfare between the two tribes.

During the 18th and early 19th centuries, a succession of French, British, and American fur trade companies came to the area to trade with its inhabitants. By 1820, however, the valley's beaver population was severely depleted and trade eventually ended.

In 1837, the United States negotiated treaties with the Ojibwe and the Dakota for the wedge of land between the St. Croix and Mississippi Rivers. Ratification of the treaties opened the land for settlement by non-Indians. Commercial logging of the abundant white pine became the region's primary industry. Land in the area also began being sold for agricultural purposes to settlers from a variety of ethnic backgrounds.

The river was the source of political dispute when Wisconsin became a state in 1848. The decision to use the river as a boundary between Wisconsin and the neighboring territory (which would later become Minnesota) was difficult for many residents who felt the river connected them economically and otherwise.

By the 1850s, tourism to the scenic river valley was being promoted. In 1895, Interstate Park was established, helping to preserve a portion of the valley. Other conservation efforts in the 20th century helped make the parks, river towns, and lakes of the region into popular recreation destinations. In 1968, the federal government designated the St. Croix as one of the original eight rivers protected under the National Wild and Scenic Rivers Act.