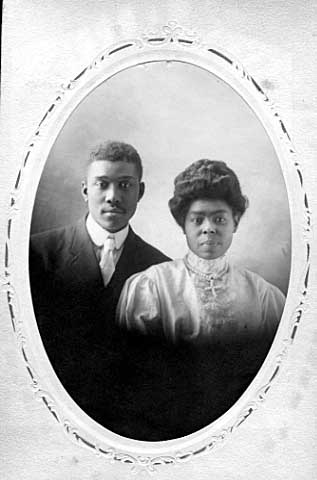 " For more than 150 years, the Twin Cities have been home to small, independent, and industrious African American communities."  [David Vassar Taylor, African Americans in Minnesota].

Unlike other ethnic groups in the state, the ancestors of African Americans were brought to North America as enslaved people, and some were enslaved by whites living in Minnesota -- from officers at Fort Snelling to pioneer settlers in St Paul.  Additionally, many African Americans relocated to Minnesota to seek better opportunities for social and economic advancement.

African Americans in Minnesota demonstrated resilience and created communities, particularly within the larger Twin Cities.  They organized social clubs and churches, published newspapers, and fought for their rights.  Many worked for the railroads, most often as Pullman porters, dining car workers, and cooks. Knowledge of  African American history in Minnesota helps people researching family histories think about where to look for specialized information, as well as checking the usual censuses, city directories, military records, and county historical society holdings that everyone doing genealogy needs to use.

Minnesotans typically leave records of births and deaths, marriages, education, employment, religious and political affiliations, military service, property ownership, and relationships to government and the law, ranging from paying taxes and registering a business, to living in a sanatorium or other state institution. The Minnesota Historical Society Library has many of these records, as well as additional valuable items.