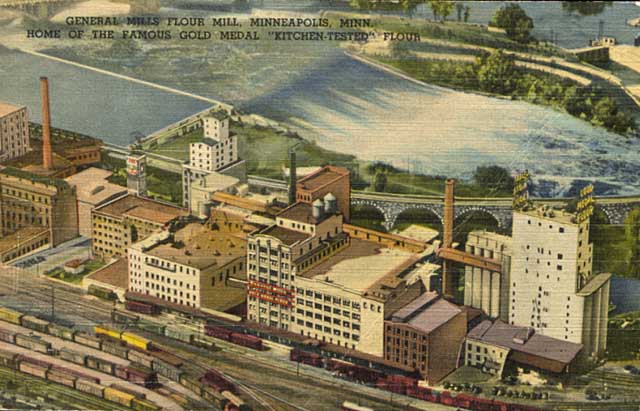 Donald N. Gregg Flour Milling Collection, 185?-198?. Subject files, including photocopies, photographs, and printed items, related to flour mills and milling in Minnesota and other Midwestern states (ca.1850s-1980s). The largest group of materials consists of files arranged by Minnesota city, with individual files for each mill within a city. There are also files containing background material on milling technology and the milling industry in general, files arranged by state (mostly Minnesota, but also including North Dakota and Wisconsin, with a few items from other states), files arranged by county and city (including large files on the many Minneapolis milling firms), biographical files on individual millers, and files of postcards and other graphic material. Individual files typically include photocopies of news, notes, and advertisements from the Northwestern Miller magazine and other printed sources; notes derived from various directories; and (in some cases) photographs and other original advertising materials. MNHS call number: Digital Finding Aid

Minneapolis based General Mills, one of the world's largest food companies, traces its beginnings to Cadwallader C.Washburn who, in 1865, formed the Minneapolis Milling Company in order to lease power rights to mill operators. Ten years later, Washburn built his first flour mill near the falls of St. Anthony.

In 1874, the Washburn 'A' Mill was completed, only to be destroyed four years later by a flour dust explosion. Undeterred, Washburn rebuilt and, with new partner John Crosby, won medals in the first Millers' International Exhibition. The company's highest quality flour has been marketed under the Gold Medal label ever since.

In 1928, Washburn-Crosby president James Ford Bell consolidated with other mills, and General Mills was born. During this period, General Mills' iconic trademark, fictitious homemaker Betty Crocker, was created, and the company pioneered packaged food products such as Wheaties, Bisquick, and Cheerios.

Charles H. Bell moved the corporate headquarters to Golden Valley in 1952, and the company diversified into the toy and fashion industry. General Mills acquired hometown rival, Pillsbury, from British food company Diageo in 2000. The company has been known for its civic involvement through its General Mills Foundation, charitable contributions, and employee volunteerism.