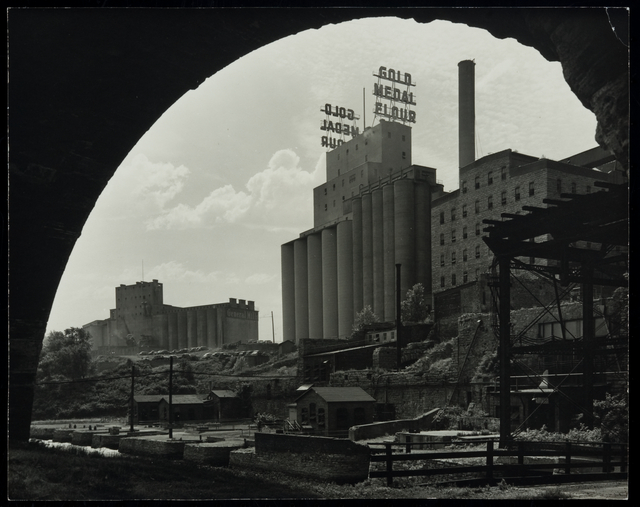 John Crosby Interview, 1955.
A typewritten transcript of an interview between John Crosby and Lucile Kane of the Minnesota Historical Society. John Crosby briefly describes his father’s business relationship with William D. Washburn, C. C. Washburn, and William H. Dunwoody; the formation of the Washburn-Crosby Company; the investment by the British Syndicate in the company; and the Dunwoody Institute.
MNHS call number: See finding aid in the library (P2381).

Donald N. Gregg Flour Milling Collection, 185?-198?.
Subject files, including photocopies, photographs, and printed items, related to flour mills and milling in Minnesota and other Midwestern states (ca.1850s-1980s). The largest group of materials consists of files arranged by Minnesota city, with individual files for each mill within a city. There are also files containing background material on milling technology and the milling industry in general, files arranged by state (mostly Minnesota, but also including North Dakota and Wisconsin, with a few items from other states), files arranged by county and city (including large files on the many Minneapolis milling firms), biographical files on individual millers, and files of postcards and other graphic material. Individual files typically include photocopies of news, notes, and advertisements from the Northwestern Miller magazine and other printed sources; notes derived from various directories; and (in some cases) photographs and other original advertising materials.
MNHS call number: Digital Finding Aid

Oral History Interview with Charles H. Bell, 2 sound cassettes (60 min. each)
Produced by Minnesota Historical Society. Interviewed by James E. Fogerty at the Minneapolis Club. Minneapolis, Minn.: October 2, 1998.
Bell is the retired chairman and president of General Mills, Inc. He recalls the various positions he held at the company and the people with whom he worked. He discusses the Company’s creation by his father, James Ford Bell, its growth and development, and both structural and management changes over the years.
MNHS call number: Digital copy of the transcript; Digital recording of the interview: Part 1, Part 2, Part 3, Part 4

Oral History Interview with E. Robert Kinney, 4 sound cassettes (60 min. each)
Produced by Minnesota Historical Society. Interviewed by James P. Shannon. St. Paul, Minn.: 2009.
E. Robert Kinney talks about his early life in Maine, his crab canning business, the acquisition of the business by Gorton’s, his term as a leader in Gorton’s and its merger with General Mills, his tenure as president, chairman, and CEO of General Mills, and his impressions of life in Minnesota.
MNHS call number: Digital Finding Aid; Digital copy of the transcript; Digital recording of the interview: Part 1, Part 2, Part 3