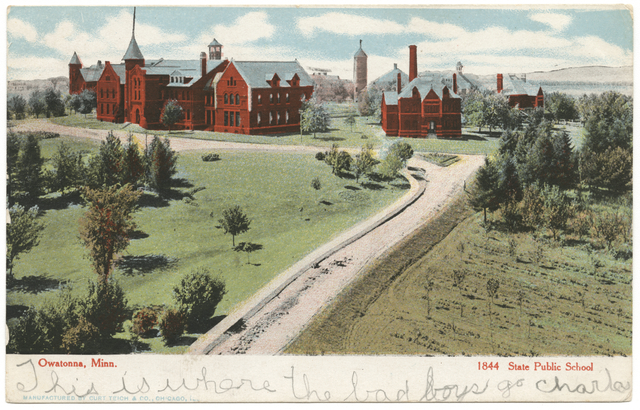 The State Public School was established at Owatonna in 1885  as an institution for dependent and neglected children between the ages of 3 and 14.

Efforts were made to place all children in adoptive homes.  The practice of indentured placement, whereby children were put in homes (often farms) on contract to do work or learn a trade in exchange for a payment to the state, was used on a limited basis until it was abolished in 1936.

Children who were not placed in a home or adopted were discharged when they became self-supporting or when their parents were able to care for them.

The State Public School served as the state orphanage until 1945 when the school became the Owatonna State School and its mission shifted to educating children with developmental disabilities.

Some of the finding aids for the State Public School records are available online; others can be found in notebooks available in the library.

Photographs of Owatonna State Public School can be found in Collections Online.

Records about individuals may be restricted to protect personal privacy. Owatonna State Public School case files for adopted children are closed for 100 years from the date of the adoption and are available before this date only with a court order. An application for access to records on individuals is available.