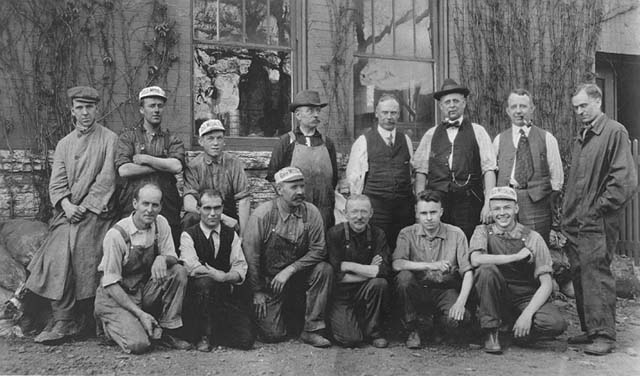 Clayton A. Videen Research Notes. Handwritten copies of newspaper and magazine articles selected and annotated by Videen detailing strike activities in the Mesabi and Cuyuna Iron Ranges in 1907 and 1916.  MNHS call number: See the finding aid in the library (P1676).

The history of the American labor movement is peopled by immigrants to this country. Finnish, South Slav, and Italian immigrant laborers were prominent in labor movements in the logging and mining industries of Minnesota. The Minnesota Iron Range was a major site of strife between owners and laborers, and a fertile field for labor organizing. Most famous, perhaps, was the Mesabi Range, where much of the strife occurred, and where historic battles between labor and management were fought. Two strikes on the Mesabi—one in 1907, and another in 1916—are legendary in the struggle for workers' rights and fair wages.

The 1907 strike was the first organized, widespread strike on the Iron Range. The immigrant miners — mostly Finnish — had little experience with unions or large-scale strikes. Previous work stoppages had been unplanned reactions to localized problems. The Western Federation of Miners (WFM), an organization connected to several bloody, mining-related labor struggles, sent its first organizers to Minnesota in 1905 at the request of local Finnish socialists. By June 1907 the WFM had organized fourteen locals.

Although the union had been planning a strike, the immediate cause was the layoff in July of 200 union members by the Oliver Iron Mining Company. A strike was called on July 20, 1907. In early August, strikebreakers were brought in and "deputies" hired to protect them. By mid-August, sufficient numbers of strikebreakers, combined with improved economic conditions, broke the strike. Despite minor hostilities between the strikers and the deputies, and one riot, overall the strike was relatively peaceful.

The 1916 strike began when forty miners walked off the job on June 3, 1916. The unorganized miners soon realized they needed help. Unlike the 1907 strike, this time the Western Federation of Miners was not interested in organizing the miners. Instead, the Industrial Workers of the World (IWW or Wobblies) responded, sending in some of their top organizers. Ironically, many of the strikebreakers from 1907 became instrumental in the 1916 strike.

The 1916 strike was marked by violence and repression. Unlike 1907, strikebreakers were not as readily available and other tactics were employed to end the strike. The civil liberties of strikers were violated, mine guards and police used force to intimidate strikers, union leaders were jailed, economic pressure was exerted on merchants who extended credit to strikers, and the Oliver Iron Mining Company refused to negotiate with the strikers.

The strike was called off on September 17, 1916. The miners did win some important short-range reforms from the mining company, but the company's anti-union attitude persisted for another quarter century.