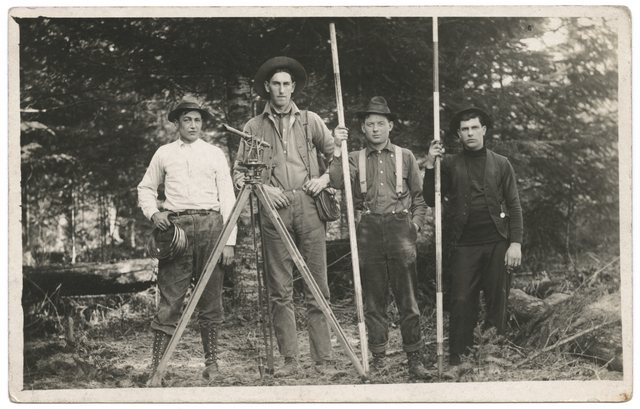 Land ownership research can be approached in a number of ways. The boxes below outline some of our more heavily used collections for land ownership research--from the initial transfer of land from the US Government to an individual, to the selling of property from one individual to another. An in-depth description of state and federal land records at MNHS can be accessed online via our Guide to the Records of Minnesota’s Public Lands.  Additional information about researching property can be accessed via our House and Building History Guide. 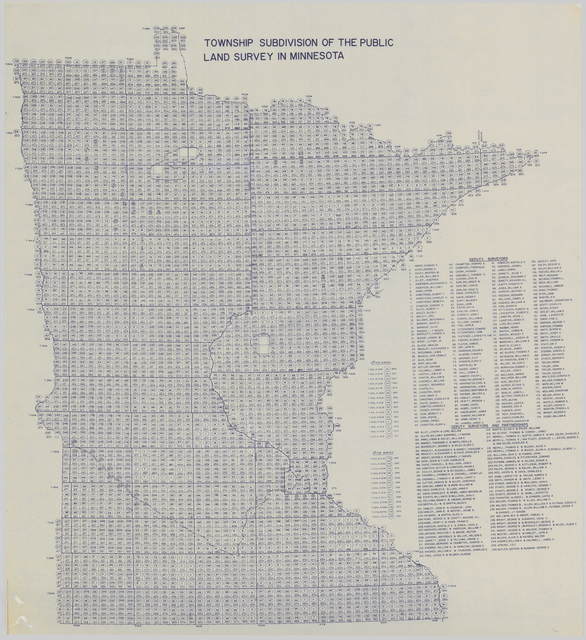 The Minnesota Historical Society Library has a large collection of federal land records that can be utilized for land ownership research. The records listed here (documenting the transfer of land from the US Government to individuals) are a small sampling of this collection.

Public land survey records are the first official records of land boundaries in Minnesota.  According to the Bureau of Land Management, surveying defines, retraces or re-establishes the boundaries and subdivisions of Federal Lands of the United States. It is also the art and science of measuring the land to locate the limits of an owner's interest.  The Public Land Survey (1848-1907) divided public lands into a grid of townships that were each six miles square. The Office of Surveyor General of Minnesota, which was established in 1857, was tasked with managing the original government survey in the state of Minnesota. The Public Land Survey of Minnesota was completed in 1907. The real estate boundaries we use today stem from these original survey divisions.

If you are interested in finding the Original Land Survey Notes and the Original Land Survey Plat Maps for Minnesota, visit the Bureau of Land Management website. Also available through this website, are the land patent documents, the legal transfer of parcels of land from the U.S. Government to individuals. A patent will include the date, legal description of land, patent number, and office that issued the patent.

Field notes, plat maps, and patents are unavailable for viewing in their paper form due to conservation issues. Detailed inventories of these records can be found in the General Land Office State Archives records at the library.

Homestead Records: The Original Entry Tract Books created by the U.S. General Land Office are not digitized, but they are available on microfilm at the library. These records provide a consolidated record of the initial transfer of title from the United States to private parties or to the state.  The price of the parcel of land, original purchaser, number of the homestead certificate or other authorizing document, date the final patent was issued, name of patentee, and citation to the entry in the land patent records in the U.S. General Land Office records in the National Archives are included in this resource. MNHS call number: Online Finding Aid

U.S. General Land Office, Register of Land Entries
Records of the U.S. General Land Office districts documenting the acquisition of state land by cash purchase, various types of scrip, military bounty land warrants, under the provisions of the Homestead Act or Timber Culture Act, or of ceded Indian lands. Although these records focus on the details of a land transaction, they also place the purchaser in a specific place at a specific time. Some contain brief personal information about the purchaser. Additional biographical information may be found among the registrars' and receivers' correspondence of the land districts, especially when the validity of the entries was contested.
Search the library catalog for General Land Office district, or by the name of the specific land district if known.

Deeds: Records of the sale and mortgage of land are filed in the office of the county recorder.  MNHS has microfilm copies of county deed records for certain counties:

Allotment Records: The policy of allotment effectively broke up tribal control of land on reservations.  Allotment placed control of the land with individuals and families rather than with the tribe.  These records contain the name of the allottee receiving land on a certain reservation, age, sex, relationship to heirs, and place of allotment.  More information about accessing online indexes and registers to allotments is outlined in the Ojibwe and Dakota Family History Research Guides.

Plat Maps:
County atlases, which include plat maps of individual townships, typically have photographs of notable residents, buildings, and property owner indexes.  In rural plat maps, property owners names are typically written on the map.  Visit our Map Research Guide for information on accessing digital plat maps and searching for plat maps in our online catalog.

The Minnesota Historical Society Library has US General Land Office Land District records from across the state for various years.  These records typically contain registers of homestead and other types of land entries; patent records; land contest records, and related materials covering land transfers in Minnesota.