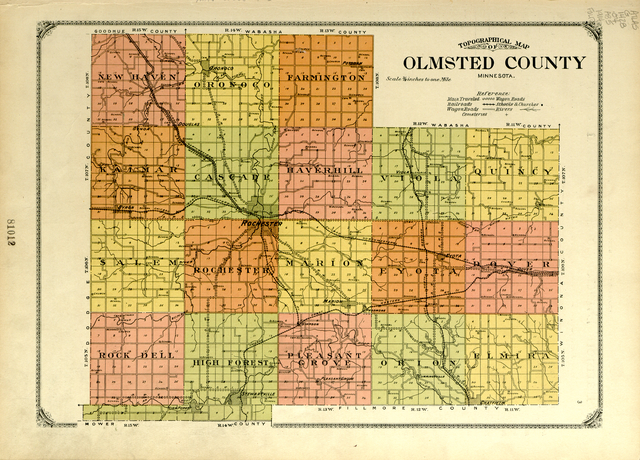 Topographic maps are based on surveys of the land. They are also called topo maps or contour maps because of the prominent 'contours' or lines depicting the rise and fall of terrain. Topographic maps also usually show water bodies, streams, forest cover, and built areas. These maps come together in series, at different scales and extents, and are published by the United States Geological Survey.

MNHS has a federally produced topographic map set of Minnesota in detailed scale. More than 1,700 sheets cover the state.  Most were produced after World War II and contain information about the physical lay of the land and such cultural features as individual farms, small villages and towns, rural churches and cemetery locations.  They are often the only street maps available for many urban places.

Historical Topographic Map Collection is an online resource that captures all editions of the more than 193,000 topographic maps published by the USGS since the inception of the topographic mapping program in 1884.

The U.S. Geological Survey Topographic Maps is an online resource with an extensive collection of topographic maps in electronic form.

Search the library catalog with the subject keyword "topographic maps" or with the Geological Survey (U.S.) as an author.