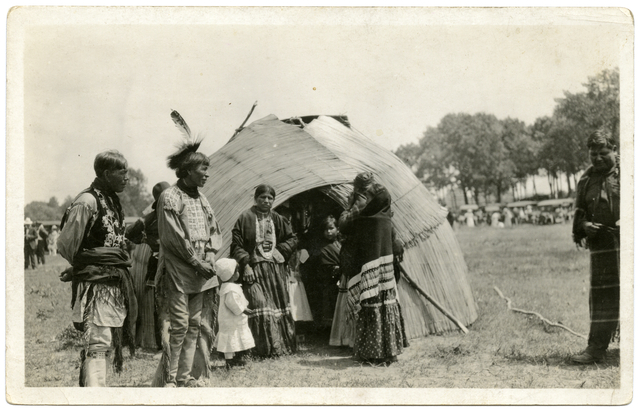 Indian Census Rolls, 1885-1940.
Contains only records of Minnesota Indians and Indian groups in Wisconsin, North Dakota, and South Dakota with Minnesota connections.  Includes both Dakota and Ojibwe Indians and are arranged by reservation, although there is not a census for every reservation or group of Indians for every year. Only persons who maintained a formal affiliation with a tribe under federal supervision are listed.
MNHS call number: Digital Finding Aid
*Originals are in the National Archives, Record Group 75, Office of Indian Affairs.

Letters (1936) and Census (1919) of the Bois Forte Ojibway at the Nett Lake Agency.
A letter (March 4, 1936), addressed to J.S. Monks, acting superintendent of the Chippewa Consolidated Agency at Cass Lake, Minnesota, was a request from G. Monson of the Office of Indian Affairs at Nett Lake for a copy of the census to be used in securing pension benefits for the elderly. Monk’s reply (March 10, 1936) was accompanied by a copy of the census. Information in the census includes the individual’s Indian name, English name, relationship to the head of the household, date of birth, and sex.
MNHS call number: See the finding aid in the library (P2038).

List of Chippewa Indians at Mille Lacs About 1880.
A handwritten list of 897 Ojibway Indians at the Mille Lacs Reservation in about 1880.
MNHS call number: See the finding aid in the library (P189).

Mahnomen County Tax Lists, 1940-1971.
Tax lists for the civil subdivisions and unorganized territory of Mahnomen County, recording the taxes assessed and paid on real and personal property for the sample years 1940-1941, 1950-1951, 1960-1961, and 1970-1971. Earlier tax lists are believed to no longer exist. Mahnomen County is located within the boundaries of the White Earth Indian Reservation.
MNHS call number: Digital Finding Aid

Signature Rolls of the Chippewa Indians in Minnesota, 1889.
On January 14, 1889, Congress approved “an Act for the relief and civilization of the Chippewa Indians in the State of Minnesota.” Three commissioners were appointed to negotiate with the Indians. The signature rolls contain the names of the male adult members of the bands that assented to the treaty, which ceded land to the federal government.
No. 15, pages 1435-1438: Red Lake Band
No. 16, pages 1529-1536: Pembina Bands (White Earth Reservation), White Earth Chippewas of the Mississippi, Gull Lake Band, and White Oak Point.
MNHS call number: Reading Room CS42 .M553 no. 15 and no. 16

The entire population of Minnesota was enumerated in two series of censuses: one by the U.S. Census Office/Bureau of the federal government, and another by the Territory and State of Minnesota.

Federal Census for Minnesota, 1850-1930.
The federal census occurred in the years ending in “0” beginning with 1850. There was an additional territorial census taken by the federal government in 1857. Although Indian people were not supposed to be listed before 1875, some are listed in the 1850 census. Note: the 1900 census had a separate Indian census schedule.
MNHS call number: See the finding aid in the library (Microfilm).

The Library also has indexed census information regarding Minnesota and other states on subscription databases such as Ancestry.com. This service is free of charge for library visitors.

Annuity and Other Expense Records for Several Bands of Chippewa Indians in Minnesota, 1874-1876.
An accounts ledger (1874-1876) and annuity rolls (1874) documenting annuity payments and other expenses for the Leech Lake Pillager and Lake Winnibigoshish bands and the White Oak Point Mississippi band of Chippewa (Ojibway) Indians. Each entry in the annuity rolls gives the name of the family head, the number of men, women, and children in the family, and the amount of annuity paid.
MNHS call number: See the finding aid in the library (P2643 and +304).

Chippewa Annuity Rolls
Annuity rolls and related records for Minnesota Ojibway Indian bands whose members were paid annuities by the federal government under various treaties between 1841 and 1907. They include the names of Indian and “half-breed” heads of families, the names or the number of other family members (primarily women and children), and the amount of annuity paid.
MNHS call number: Digital Finding Aid