Church records can provide information about individuals who were baptized, married, or buried by a congregation. Membership lists are available for some congregations. The Library has a rich but incomplete collection of records from denominations that proselytized Ojibwe people, mainly Episcopal, and Roman Catholic, and from some specific congregations of those denominations. 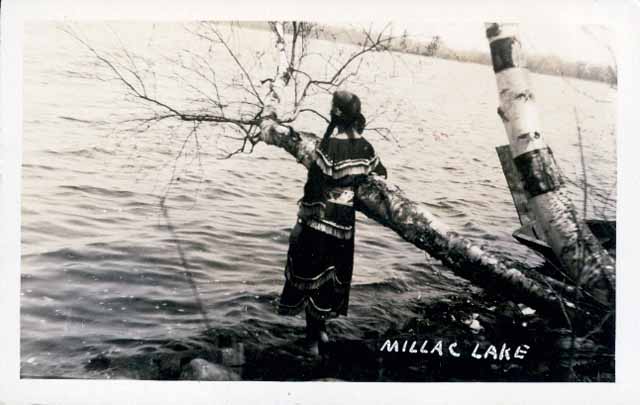 Francis Pierz Papers, 1835-1870.
Photographic copies of parish registers for Ojibwe (Chippewa) Indians living at various points on Lake Superior in the United States and Canada (1835-1839) and for the Crow Wing Mission in Minnesota (1852-1870) kept by Father Francis Xavier Pierz, a Roman Catholic missionary priest. The Lake Superior register records data on baptisms for Ojibwe in Minnesota, Michigan, and Ontario. The register for the Crow Wing Mission contains information on baptisms, deaths, and marriages, not only for Indians at Crow Wing but also for those at Belle Prairie and other mission sites served by Pierz. Some of the information is recorded in Latin.
MNHS call number: See the finding aid in the library (P2659).

**Many records for the Catholic communities in Minnnesota are held by the archdoicese for that region.

Cass Lake Indian Convocation record book, 1924-1943.
Record book including the names of delegates, both Indian and white, who attended the annual Indian Convocation held at the Cass Lake Mission from 1924, when the Diocese of Duluth acquired and improved the property, until 1943, when the Duluth Diocese merged with the Diocese of Minnesota.
MNHS call number: Digital Finding Aid

Bishop Henry B. Whipple Records, 1859-1899.
Contain a series of Registers of Baptisms, Marriages, Burials, etc., performed by Whipple during his travels around the diocese. The baptisms registers cover 1859-1895, and the marriages and burials register covers 1859-1895.
MNHS call number: Digital Finding Aid

Diocese of Duluth records, 1852-1956.
Correspondence, minutes, legal documents, financial records, printed materials, and miscellaneous records documenting the administration, finances, and property holdings of the Diocese of Duluth, from its inception in 1895 through its 1944 merger with the Diocese of Minnesota. The files also provide information on candidates for ordination to the ministry, missionary work among the Ojibwe, major revisions made to the diocesan constitution and canons in 1938, parish finances and support; details of the merger with the Diocese of Minnesota and subsequent merger of the two property-holding corporations, the diocese’s investments in building bonds and other properties, and a legacy left to the diocese by Lucy M. Warner.
MNHS call number: Digital Finding Aid

E. Steele Peake and Family Papers, 1853-1930.
Diaries, correspondence, reminiscences, and other papers of Peake, who served as a Protestant Episcopal missionary to the Ojibwe Indians, Civil War chaplain, and home missionary and pastor in California, North Dakota, and Minnesota. The diaries (1856-1905) cover Peake’s missionary activities at Crow Wing, Fort Ripley, and Gull Lake (MN); and his pastoral service at Austin, Minnesota (ca. 1865-1867), in California (1867-1878), at Moorhead and Detroit, Minnesota, and Valley City, North Dakota (ca. 1878-1889), and at Faribault (ca. 1890s). They provide information on pastoral calls, sermons, baptisms, marriages, confirmations, St. Mary’s Hall in Faribault, and the Protestant Episcopal Home in St. Paul. Peake’s correspondents included such important Episcopal figures as the Reverend Ezekiel Gear, the Reverend Joseph A. Gilfillan, Bishops Henry B. Whipple and Jackson Kemper, and Enmegahbowh (John Johnson), a Native missionary among the Ojibway. Also present are reminiscences by Peake, Mrs. Peake, and Enmegahbowh, records (1853-1861) of confirmations at Gull Lake, account books (1889-1895), and an account of the abandoned town of Crow Wing.
MNHS call number: See the finding aid in the library (A/.P357).

Edmund F. Ely and Family Papers, 1833-1931.
Typewritten copies of diaries (1833-1854, with gaps) and correspondence (1835-1904) of this missionary of the American Board of Commissioners for Foreign Missions to the Ojibwe Indians in Minnesota and on the southern shore of Lake Superior. They afford excellent detail on the topography, fur trade, Indian life, and missions of the region. After 1849, data on land speculation and politics at the head of Lake Superior are numerous. One diary was kept mostly by Mrs. Ely and records the babyhood of her two eldest children.
MNHS call number: See the finding aid in the library (P2637).

Henry B. Whipple Papers, 1833-1934.
Whipple’s correspondence, diaries, sermons, reminiscences, and other materials as the first Protestant Episcopal bishop of Minnesota (1859-1901) and as a reformer of the United States Indian service. They provide information particularly on ecclesiastical policy, Diocese of Minnesota matters, Indian missions, government relations with the Indians, and the Indian rights movement of the latter 19th century.
MNHS call number: Digital Finding Aid

Joseph A. Gilfillan and Family Papers, 1872-1940.
Correspondence, articles, translations, and miscellany concerning Gilfillan’s work as a Protestant Episcopal missionary on the White Earth Indian Reservation (1872-1898) and his study of Ojibwe language and culture. They include: Articles and reminiscences by Gilfillan and his wife Harriet on their missionary work; Gilfillan’s translations of Ojibway personal and place names and legends; letters (1883-1893) in Ojibwe from Ojibwe ministers and missionaries, with Gilfillan’s translations; miscellaneous letters and memorabilia on Ojibway language and culture and on church affairs; family and genealogical data; information on the erection of a monument to Gilfillan in Itasca State Park (1940). Two scrapbooks (1872-1913) contain clippings on Protestant Episcopal church activities, missions in Minnesota, Gilfillan’s work, the Ojibwe Indians, and Minnesota history.
MNHS call number: See the finding aid in the library (M168 and P620).

William T. Boutwell Papers, 1832-1881.
A copy of a diary kept on Henry R. Schoolcraft’s expedition to the source of the Mississippi River in 1832 and throughout Boutwell’s residence as missionary to the Ojibwe at Leech Lake. Includes rough notes made by J. Fletcher Williams at the time of an interview with Boutwell and reminiscent of the latter’s life as a missionary, two autobiographical articles by Boutwell, a letter received from his father-in-law, Ramsay Crooks, in 1836, and copies of two letters written by Boutwell in 1832.
MNHS call number: See the finding aid in the library (P2528).