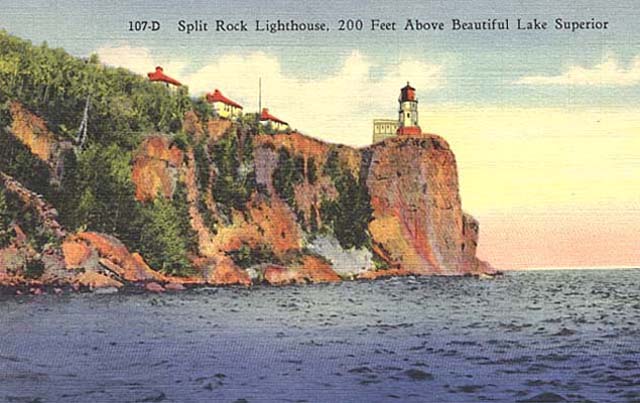 Purported to be “the most dangerous piece of water in the whole world” by writer James Oliver Curwood, Lake Superior lived up to its reputation during the 1905 shipping season when violent storms led to 116 deaths and the destruction of dozens of vessels.  These tragedies prompted the construction of the Split Rock Lighthouse and fog signal in 1909-1910. Construction of the light house was difficult because its remote location required all building materials to be brought to the site by boat.

Only accessible by water in the first years of operation, Split Rock Lighthouse keepers and assistants lived a relatively isolated life requiring around the clock operation and maintenance.  In 1924 the North Shore Scenic Highway opened and enabled a new era of lighthouse tourism with increasing numbers of visitors driving Split Rock Lighthouse to be one of the most visited and photographed lighthouses in the country.

Split Rock Lighthouse remained in operation until 1969 when it was decommissioned and closed, since modern navigational equipment and radar had made its light and fog signal obsolete.  Tourist interest in the site remained, however, and in 1971 the State of Minnesota opened the site to the public as part of a new state park.  In 1976, administration of the site was transferred to the Minnesota Historical Society with the Department of Natural Resources continuing to maintain the surrounding state park.