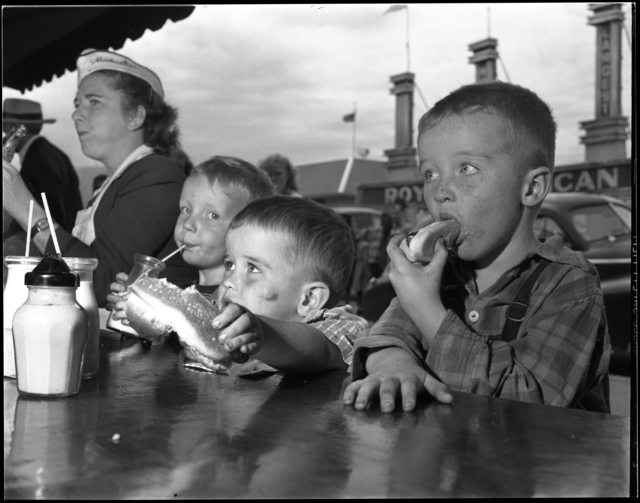 The Minnesota State Fair, affectionately referred to as “The Great Minnesota Get-Together,” is the second largest state fair in the country with attendance totals over 1.7 million in each year between 2011 and 2013. Several Territorial Fairs were held prior to Minnesota’s admission to the statehood in May of 1858, but the first official State Fair wasn’t held until 1859 due to residual economic trouble from the Panic of 1857. Since 1859 the Fair has been held every year with only six exceptions:

The first official State Fair was held in 1859 in Minneapolis by what is now Fifth Street and Marquette Avenue. It was by no means a great success, with bad weather and a small number of displays causing low attendance. The second Fair, held in 1860 at Fort Snelling, was much more successful. In 1885, after a long struggle between the cities of Minneapolis and Saint Paul, the final location of the Fair in what is now Falcon Heights was decided upon.

Early Fairs were focused on agriculture, with the big draws coming from displays of new farm technology and prize-winning animals. As the State Fair has evolved the main focus has remained on agriculture and industry, but has also grown to encompass the fields of education, art, entertainment, technology, politics, and more. Today the Minnesota State Fair can be seen as representative of life in Minnesota, with the goal of showcasing the best of the best Minnesota has to offer.