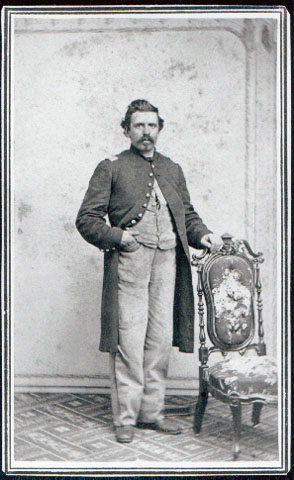 After the Civil War, the Adjutant General’s office created combined rosters for every military unit that served from Minnesota, as well as lists of men who served as officers in the regular army.  There are also rosters of Minnesota men who signed up for the U. S. Colored Troops, or served in those units as white officers. The series also includes information on men who were drafted or acted as substitutes for drafted men.  All of these rosters were eventually published.

Minnesota In the Civil and Indian Wars, 1861-1865
A more complete listing of the individuals who served in the U.S. Army during the Civil War and the U.S.-Dakota War from Minnesota, including militia companies and those serving in the U.S. Colored Troops (as it was known at the time). Volume I contains the histories and rosters of each company along with the history of each company's engagements; Volume II contains official reports and correspondence. Volume III is a name index to the rosters in Volume I; some copies, including the copy at the MNHS Library's Reference Desk, have been hand-annotated with citations to additional resources.  A microfilm copy can be borrowed through interlibrary loan.   MNHS Call Number: Reference Desk E515 .M66 1994 and Microfilm #830

Compiled Rosters of Minnesota Civil War Regiments
Two separate sets of compilations (ca. 1865 and ca. 1915) of service information on individuals who served in Minnesota regiments during the Civil War. The 1915 compilation also contains registers of Minnesota draftees and substitutes, enrollees in the U.S. Engineers, enrollees in the U.S. Colored Troops, and militia units who served in the 1862-1865 Dakota Conflict. The entries give name, rank, age, nativity, date and place enrolled and mustered, residence, and remarks (usually on service transfer or termination).
MNHS Call Number: Digital Finding Aid

Civil War Muster Rolls, 1861-1865 Muster-in, muster-out, and descriptive rolls for Minnesota companies, portions of companies, and individuals that served in the Civil War, accompanied by some correspondence and other related documents. These records give the name of the recruit when and where he enlisted and a very brief description of his service, usually denoting promotions, wounds, desertions, etc.  MNHS Call Number: See the finding aid in the library (Adjutant General).

Minnesota Civil War Veteran Card File
A former MNHS librarian, Wally Toensing, created an extensive card file of every Civil War veteran who lived in Minnesota. This file usually includes State, Regiment and Company and sometimes references the Adjutant Generals Pension books by volume and page number. Some cards also include death dates and membership in G.A.R. encampments; some cards also include a code that refers to a citation in Warren Upham's Minnesota Biographies. Consult the reference cards at the beginning of the file or a reference librarian for more information.
MNHS Call Number: Located in the Weyerhaeuser Reading Room

Pension Registers and Indexes, 1878-1949
Registers of pension claims filed by veterans of military service, or their dependents, who resided in Minnesota at the time the claim was made. The entries are mainly for veterans of the Mexican War (1848), the Civil War, and the Spanish-American War; however, some claims from World Wars I and II are also included. The presentation and completeness of entries varies somewhat, but generally includes class of claim (e.g., original, arrears, increase, restoration to rolls, bounty, widow, father, mother, Mexican War), pension number, date filed, claimant's name and address, "account of" (veteran for whose service the pension was being claimed), service unit and rank, details (sometimes considerable) on the nature of the claim and/or proofs offered, and a record of administrative actions taken on the claim.
MNHS call number: Digital Finding Aid
Veterans graves registration reports, [ca. 1930]-1975 (bulk 1930-1969). Report forms for deceased veterans of the Civil and Indian wars, Spanish-American War, World Wars I and II, Korean War, and Vietnam War who are buried in Minnesota. They were compiled by the Veterans Affairs Department during the period 1930-1969. For the period 1970-1975, some counties (mainly Goodhue, Hennepin, Houston, Ramsey, and Swift) and the Fort Snelling cemetery continued to submit reports. Information provided: veteran’s name, date and place of enlistment, rank and organization, date and place of discharge, legal address or usual residence, birth date, death date, cause of death, name and address of next of kin, place of burial, name of cemetery, and grave location. These reports do not constitute a complete record of all veterans buried in Minnesota. Examples of the short form and the long form are available online. MNHS Call Number: Digital Finding Aid. An index to these records is available in the Minnesota People Records Search.
To order Civil War pension records for an individual, visit our Civil War Pension Record Research Request.

Post Records, Grand Army of the Republic, Department of Minnesota
In addition to minute books and other organizational records, these records include biographical and military service information submitted by members.
MNHS Call Number: Digital Finding Aid.

Civil War Soliders and Sailors Database, National Park Service
The Civil War Soldiers and Sailors System (CWSS) is a database containing information about the men who served in the Union and Confederate armies during the Civil War. Other information on the site includes histories of Union and Confederate regiments, links to descriptions of significant battles, and selected lists of prisoner-of-war records and cemetery records, which will be amended over time.