The war between the U.S. and Spain began in 1898 and, as in the Civil War, troops were raised through the states to supplement the regular Army. Minnesota sent four regiments: the 12th, 13th, 14th and 15th infantry regiments. Only the 13th Infantry saw service outside of the U.S., when they were sent to the Philippine Islands in 1899 to suppress the Philippine insurrection after the Philippines, along with Puerto Rico and Guam, were ceded to the United States by Spain at the end of the Spanish-American War.

These regiments also created muster rolls but these records were supplemented by detailed service record cards for every individual. Following World War I, the Minnesota War Records Commission published a comprehensive history of Minnesota’s role in the Spanish American War, Minnesota in the Spanish-American War and the Philippine Insurrection.

There were two other military conflicts involving the U.S. Army during this time period. The Leech Lake Battle/Battle of Sugar Point occurred on October 5, 1898 between the U.S. 3rd Infantry and the Pillager Band of Objibwe Indians in Cass County, Minnesota; and in 1900-1901 the United States contributed troops to a multinational European coalition to suppress the Boxer Rebellion in China in an action referred to as the China Relief Expedition. While the state of Minnesota did not raise troops to participate in either of these conflicts, there is information about veterans of those conflicts in the records below. 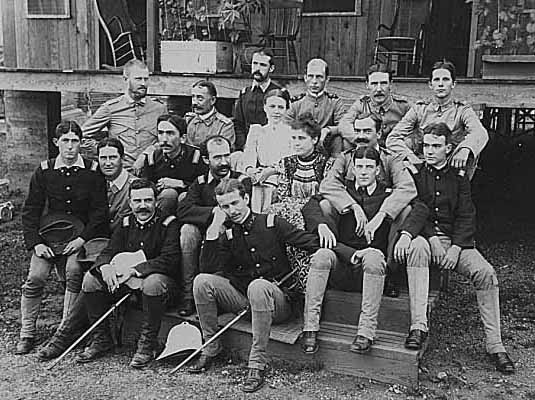 Minnesotans in the Spanish-American War and the Philippine Insurrection, April 21, 1898-July 4, 1902: roll of the dead by Antona Hawkins Richardson.
This series of articles in the Minnesota Genealogical Journal includes a list of U.S. Army personnel killed in the Leech Lake Battle (also known as the Battle of Sugar Point) of October 5, 1898.
MNHS Call Number: Reading Room CS42 .M553 no.19-21

Spanish-American War Military Service Records, 1898-1900
Compiled service data on Minnesota veterans of the Spanish-American War. They provide personal data, enlistment and muster-out information, military units served with, and various service details for each soldier and sailor. Many of the same soldiers repeat from file to file, but each file provides some information not found in the others.
MNHS Call Number: See the finding aid in the library (Adjutant General).

Spanish-American War Muster Rolls, 1898-1899
Muster-in rolls for the four Minnesota regiments that served in the Spanish-American War; muster-out rolls, especially for officers; and field returns, which provide counts of the numbers of officers and men in various statuses in each company.
MNHS call number: Digital Finding Aid

Spanish-American War veterans disallowed relief application files, [1930s-1940s].
Applications for relief submitted by veterans, or the survivors of deceased veterans, of the Spanish-American War, under the provisions of Laws of Minnesota 1931, Chapter 405, that were disallowed due to non-residence, non-service, or for other reasons. The files include the application form; correspondence with the Spanish War Veterans’ Relief Board regarding the application and decision; and sometimes other supporting documentation. These files do NOT appear to be included in the microfilmed index to other Spanish-American War relief payment records (SAM 3, Roll 1). However, the Spanish War Veterans’ Relief Board application register (Box 112.E.2.6F) does include entries for the disallowed applications. MNHS Call Number:  See the finding aid in the library ( Adjutant General.)

Spanish-American War Veterans Relief Payment Records, 1931-1943 Records of this relief program administered by the Adjutant General as a member of the Spanish War Veterans’ Relief Board. Includes applications, with index, for relief submitted by Minnesota veterans, or the survivors of veterans, of the Spanish American War, the Philippine Insurrection, and the China Relief Expedition, under the provisions of Laws of Minnesota 1931, Chapter 405; supplementary payment files; and an application register. Intermingled with the application files are records of administrative and salary expenses of the Relief Board itself. MNHS call number: Digital Finding Aid

Spanish-American War Veterans Unpaid Relief Applications, [ca. 1931-1942].
Unpaid applications for relief submitted by Minnesota veterans, or the survivors of veterans, of the Spanish-American War, the Philippine Insurrection, and the China Relief Expedition, under the provisions of Laws of Minnesota 1931, Chapter 405. This relief program was administered by the Adjutant General as a member of the Spanish American War Veterans’ Relief Board. These applications appear to be those for which, for reasons unknown, no decision as to either payment or disallowance was made. Application packets may contain such documents as application forms, discharge papers, affidavits documenting residence, correspondence, and marriage and death certificates. MNHS Call Number: Digital Finding Aid