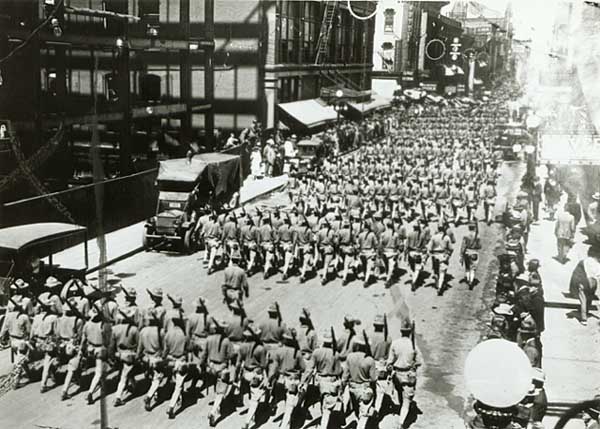 The types of military records kept by Minnesota organizations and state government agencies have changed greatly over time. Up to the period just before World War I, records that document an individual's active service in a branch of the military, such as muster rolls, combined rosters, or military service cards, were kept by the Minnesota Office of the Adjutant General for troops that were raised by the state. When the federal government took over the recruitment and record-keeping for the armed forces beginning with World War I, the Adjutant General's office became responsible for the administration of veterans' benefits and bonus applications and payments.

After the end of World War II a newly-created agency, the Department of Veterans' Affairs, administered veterans' benefits. The Department of Veterans' Affairs also maintained a registry of veterans' graves in Minnesota. Some other agencies were only in existence during a particular war, or served only the veterans of one war. The Grand Army of the Republic, Department of Minnesota was active from 1866 to 1947; its publications contain data on the veterans who were members. During World War I there were two additional Minnesota state government agencies responsible for maintaining military service records: the War Records Commission (active from 1918 to 1925) and the Public Safety Commission (1917-1920) which created records such as casualty lists, Gold Star Rolls, and service record questionnaires. Some county governments, particularly during World War II, also kept service and selective service record cards.  Finally,while they are not official government records, many non-governmental veterans' service organizations such as the Veterans of Foreign Wars kept lists of veterans who were active in those organizations and can be a valuable source of service information. During wartime (particularly during World War II) many churches and schools published books of members and students who were, or had children who were, in active service.  The Minnesota Historical Society Library has records of Minnesotans' military service in the following conflicts:

Watch this quick video tutorial about Military Service Records at the MNHS library.