Although the Federal government was far more involved in raising and equipping troops by 1917, this period has some of the best documentation in the Minnesota Historical Society's collections. Aware of the importance of the conflict, the State of Minnesota created the War Records Commission to document Minnesota’s role in World War I. The Minnesota Historical Society was part of the commission and the repository for its records. Several useful series were created by the commission.

Another agency that assumed wartime responsibilities was the Public Safety Commission, a seven-member commission (governor, attorney general, and five persons appointed by the governor) given broad powers to support the war effort. This agency’s activities resulted in the creation of several records series documenting both military service and home-front activities.

Also included here are the records of those who took part in the Mexican Border Service (or Campaign) of 1916, when Minnesota's National Guard was mobilized and stationed on the U.S.-Mexican border during the U.S. Army's expedition against Pancho Villa. 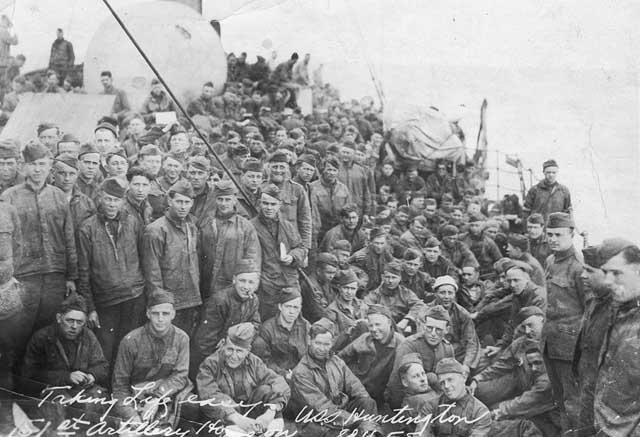 Casualty Lists and Related Materials, 1918-1920
Lists of names, addresses, and nearest relatives of Minnesota World War I casualties. Lists were prepared by county and local public safety committees as requested by the state commission. Includes correspondence relating to the compilation of the lists, and possibly several copies of draft and final lists. MNHS call number: Digital Finding Aid

Mexican Border Service Payrolls, June 1916-March 1917.
Payrolls recording the fifty-cent per day bonus granted Minnesota National Guard unit members who served on Mexican border patrol from June 30, 1916 through March 1917. The individual payroll slips, which appear to be incomplete for each company, record name, rank, unit, date of enlistment in the National Guard, dates of muster into and discharge from United States service, days served in United States service by month, total bonus payment, and the proper signatures. Payrolls for some units contain summary sheets listing names, days served, and bonus payment due not found on the individual payroll slips. These payrolls were retained because spot checking revealed some were not contained on the microfilm and often the payroll slips were more complete than the record cards, especially concerning discharge dates. Researchers should check both series.
MNHS Call Number: 109.K.12.7B

World War I Military Service Record Questionnaires, 1918-1920
Four-page questionnaires, filled out by Minnesota veterans of World War I with biographical data and details of their military service. They occasionally are accompanied by photographs, war letters, or other related material. They are supplemented by similar records for nurses and for Hennepin County personnel of service organizations.
MNHS call number: Digital Finding Aid

World War I Military Service Lists, ca. 1917-1920s
​An assortment of compiled lists of Minnesota draft registrants, inductees, enlistments, and persons who saw active duty in the armed services during World War I. Some were compiled by the Adjutant General’s Office; the source of many of the others is unknown.
MNHS call number: Digital Finding Aid

Following the war the state of Minnesota offered a bonus payment to veterans who served in World War I.

Bonus Claim Cards, 1921-1922.
Reference cards for applicants for World War I military service bonuses whose initial applications were rejected or not acted on in a timely manner by the Soldiers Bonus Board and who appealed the Board’s decision or inaction to the Soldiers’ Bonus Board of Review. Each 4" x 6" card gives applicant’s name and address, date of appeal, date the claim was received from the Bonus Board, date and place of hearing, action taken by the Board of Review, and date the claim was returned to the Bonus Board.
MNHS Call Number: Microfilm SAM 228

Mexican Border Service Bonus Correspondence and Vouchers, 1919-1921.
Correspondence regarding, and vouchers for, arrears in pay for Minnesota National Guard troops for the 12-day period between their enrollment in the Guard and their mustering into United States service for the punitive pursuit of Pancho Villa into Mexico in 1916; authorized per Laws of Minnesota 1917, c261 s6. Also letters returned to sender, for servicemen who could not be located (May-December 1920), a folder of blank forms and related correspondence pertaining to Mexican service pay, and vouchers of the supply officer.
MNHS Call Number: Digital Finding Aid

World War I Bonus Files and Index, 1919-1943. Index to and applications for military service bonus payments to Minnesota veterans of World War I. They include details on the applicant’s military service, proof of residence, proof of honorable discharge, and related data. MNHS call number: In Collections Online, search for "[last name] warrant" in the search box on the top-center area of the screen to find a solider's bonus file.

World War I Disallowed Bonus Files, 1919-1941. Applications, proof of military service, proof of residency, and related background data for Minnesota veterans of World War I whose applications for military service bonus payments were denied. Reasons for denial varied greatly but most frequently concerned residency at time of enlistment, acknowledged service that did not qualify under the existing bonus laws, or payment of a bonus to another survivor of a deceased soldier. MNHS call number: In Collections Online, search for "[last name] warrant" in the search box on the top-center area of the screen to find a solider's bonus file.

Resources Outside the MNHS

American Battle Monuments Commission
A searchable index of those buried and memorialized at World War I and World War II overseas military cemeteries, along with those names on the Walls of the Missing at the East Coast Memorial, West Coast Memorial, and Honolulu Memorial. Burial information can also be found for those interred at Corozal American Cemetery and Mexico City National Cemetery. The register does not include records for individuals who were repatriated to the United States for burial.